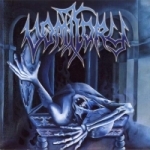 Approximate two years after “Raped In Their Own Blood” Swedish VOMITORY returned with a slightly changed line-up (Jussi Linna on vocals and Erik Rundqvist on bass) and a far better second full length, entitled “Redemption”! As Andi already praised the album in UNHOLY TERROR # 2, I try to keep this short. Even though most of the typical Swedish trademarks did remain (especially in the guitar department), it seems to me that VOMITORY had additionally listened to a lot of American Death Metal stuff as well while writing the eight songs for this album. Everything had just become so much more brutal! Just take new frontman Jussi, who has a really cool deep Death Metal voice and easily makes you forget about former vocalist Ronnie. There’s a big step forward in the production and the guys’ playing abilities have also become a lot better, which resulted in some really outstanding and totally crushing tracks. On top of all you’ll get a devastating cover of the old GOD MACABRE classic “Ashes Of Mourning Life”!! Awesome – this is Death Metal in its purest form! Too bad that the material from their 10″ picture disc (which came out in October 1999) wasn’t included as a bonus on this re-issue, cause to me those songs even blow away the entire “Redemption” album! Can’t wait to hear their Metal Blade debut!