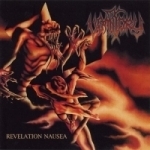 To most of you VOMITORY won’t be strangers anymore as they are around already for quite some time. I just have their album “Raped In Their Own Blood” which got released on the small label Fadeless Records, but unfortunately I missed the follow-up “Redemption”. With Metal Blade they finally found a record company which could help a lot to establish them in the Death Metal scene. “Revelation Nausea” got recorded at the Berno studios (THE CROWN, CARDINAL SIN…), offers some very solid old school moose Death and sounds as if it got released about ten years ago. Ideal food for all those who still love stuff like “Dark Recollections” or “Into The Grave”.