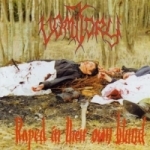 VOMITORY
Raped In Their Own Blood
(The Plague / Hammerheart Records )
40:33min

VOMITORY’s debut full length “Raped In Their Own Blood” originally came out at the end of 1996 and still features former vocalist Ronnie Olsen (who left VOMITORY shortly after to concentrate full-time on Swedish alcoholic Metal bastards GEHENNAH). Musically the featured ten okay sounding tracks were still lacking a bit in exciting ideas and variety but at least came up with raw, straight forward intensity and deep growling vocals. Unlike most of their countrymen, VOMITORY never had this typical Sunlight- nor Fredman sound – their material was just a hell lot more brutal executed. Knowing their incredible evolution ever since, I can tell you that this album by no means represents the quality of what was to come in the following years. I’m not too sure why it got re-issued so quickly, but I guess this was mainly because Wilko (from their old label Fadeless Records) is responsible for Hammerheart’s sublabel “The Plague” nowadays and therefore has better distribution opportunities. You’ll get no bonus tracks, no remix and no change in the packing, so if you already own the original, there’s no need to spend money on this again.