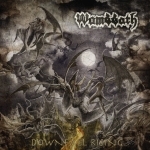 WOMBBATH is a well known Swedish Death Metal band for those into the classic early 90s era. They released a couple of recordings like the now classic "Internal Caustic Torments" debut full length in 1993. However after one more EP and a change in style they just split. After 20 years they decided to come back (with only one original member left) and return to their old school style which in "Downfall Rising" simply crushes. This is by far WOMBBATH’s best production to date. Being mixed and mastered in Florida does not affect the sweet and nostalgic Swedish sound who most of us love to death. One thing that WOMBBATH does a little different than their country mates pioneers is the masterful use of keyboards, but before you all scream… what? No, this is by no means melodic Power Metal stuff, they manage to show how to display an eerie atmosphere without sounding cheesy and weak. It is a shame that WOMBBATH couldn’t become bigger at their early stage but if they decide to stick in a little bit longer they will leave their mark for sure. www.facebook.com/wombbath, www.darkdescentrecords.com 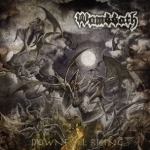 Are we living in the decade were all the 90s underground acts want to return and show the new bands how to play? Or maybe is it that we are facing an overly saturated scene return? I beg for a mix of both. While most of the bands from late 80s early 90s (all genres) released some outstanding pieces of music. I think evolution is a necessary part of our life in general. We need to evolve and move on with our way of living as it is in the music business. Some might think staying true to their roots and stay loyal to their beliefs is what makes them different from the rest as some sort of “d-evolution” way of thinking. Me? I think that you can merge both things together and have success. As with the old school Death Metal revival, the need of going “back to their roots” is a must. And we should all agree that it is very normal for that to happen, if 50% of the old school Death Metal acts of the last decade were trying to recreate and mimic what the originators of the genre made back in the golden era and caught the attention of the new generations while making some tours and grabbing some cash out of it. Well it is natural to think that all those bands, that played this music in the 90s were / are highly regarded as mentors and godfathers of the genre, could make a return and “surf the wave” of the rising old school Death Metal ocean. With all that, comes good and bad news. Some bands just “doesn’t have it anymore”. I mean, let’s be honest we all can’t live like we were back in our teenage years; lots of things have changed in our life. Mind, economy, and even the music business too. So out of those 100 bands coming back for a second chance of dropping another landmark in the genre, maybe 20% – 30% managed to pull it off, but the rest are definitely not adding anything interesting to the game. WOMBBATH came back from the dead as Hakan started a new band named SKINEATER, and asked Jonny (vocalist of SKINEATER) to help him out with some WOMBBATH tunes he had in mind. They asked Henrik who is a respected drummer (ex – GATES OF ISHTAR, ex – SATARIEL, ex – MORK GRYNING) to join the band and the rest is history. Now let’s go check what WOMBBATH has to offer this time. After a very long 19 years hiatus WOMBBATH returns with “Downfall Rising”, their formal second album in a 25 years career (counting the hiatus). This time with a revamped line-up. The cover art reflects some old school vibe mixed with new elements of the digital era. Not bad, not great, just fine. Let’s tackle the music. The album opens with an instrumental track that doesn’t actually reflect what the album sounds like, but it’s a good creepy opener. The first actual song is the second track ‘Under Apokalypsens Svarta Vingar’. As soon as the first riff is heard you know you are in a safe place with talented people that know exactly what they are doing. The song just flows with some great rhythm sections and a solo / melody at the middle of the song. The vocals are what you might expect from a band like WOMBBATH, guttural yet understandable all over the place with some dual attack to emphasize the chorus and critical parts of the song. After 5 great tracks with the same ingredients we reach the final point, a fast furious track that leaves you in a high note plus an outro. I think the running time of this album makes it perfect for a quick doze of well executed old school Death Metal, and the mastering made by the mighty James Murphy (I don’t need to tell you who James Murphy is, if you don’t know who he is maybe you have been wasting your time). In a nutshell this album is a great comeback album, out of the very low amount of acts coming back from the grave to reclaim the throne WOMBBATH is among the very few that nailed it right away. Great record, with some great tunes, straight to your skull, a good selection of tracks; it even makes you play it over and over at least 2-3 times in a row (minimum). I’m not sure if this album will make it to the end of the year’s lists; however, I know this will be highly acclaimed once it’s out. Check news and buy this record at www.facebook.com/wombbath, www.pulverised.net