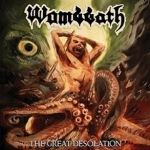 I think that the best way to start a review of a band like WOMBBATH is to talk about their past. They belong to the second wave of Swedish Death Metal, since they were born in 1990, immediately after the true originators of this scene (NIHILIST, ENTOMBED, DISMEMBER, GRAVE, UNLEASHED, CARNAGE, MORBID and TREBLINKA). WOMBBATH released three legendary recording sessions over two years: the "Brutal Mights" demo tape and the "Several Shapes" 7 EP, both in 1992, then the "Internal Caustic Torments" full length album in 1993. Unfortunately these works didn’t get the credit they deserved and the band split up in 1995 after the release of a boring Death’n’Roll 7" EP entitled "Lavatory" (1994). Panned by fans and critics, the band entered an extended hiatus until 2014, when the original guitarist Håkan Stuvemark resurrected WOMBBATH. From 2014 to 2018, though gone through various line-up changes, the band has made three split EPs and two full length albums, the latter of which has just been released by the Dutch label Soulseller Records. I must admit that I’m a fan of "Internal Caustic Torments" and to me their latest album "The Great Desolation" is pretty disappointing. Why? Because WOMBBATH nowadays lost all the characteristics that made their debut album a classic and enjoyable little gem of old school Death Metal. They used to play a simple form of primitive Death Metal, not particularly fast, but characterized by a vicious alternation of slow parts (proto slam at times), mid tempos and d-beat accelerations. The production was surprisingly good: not a mere imitation of the Sunlight Studio buzzsaw guitar tone, but had a bit fattier American sound with a powerful double bass. Another original factor was the vocal approach with some deep growlings very reminiscent of the British Death Metal style (BENEDICTION and Mark Barney Greenway, particularly). So, WOMBBATH’s early works can be described as a mixture of Swedish, American and British Death Metal. Now with their third full length album "The Great Desolation" they have taken out the US and UK influences in favour of a purer old school Swedish touch. Almost 38 minutes for nine songs of decent Death Metal with the typical Swedish guitar tone and melodies here and there. A good album that faithfully follows the rules of this genre, but with a heavy lack of creativity and brutality, if compared to the band’s past. I mean, "The Great Desolation" is not bad, it’s just average. An extra point goes to the cover artwork: a nightmarish paint with a strong lovecraftian feel. In conclusion, if you’re a die hard fan of old school Swedish Death Metal all-round, you’ll probably love this album. But, if you’re into a rawer and more brutal Death Metal approach, try to get the "Internal Caustic Torments" reissue CD, released a few years ago by Necroharmonic Productions (it includes the 1992 demo and EP too). Early WOMBBATH were the Swedish answer to: BENEDICTION, BAPHOMET, DESECRATOR, GUTTED, GOREFEST etc. Now they’re another reformed band from the 90s. For more info: www.facebook.com/wombbath, www.soulsellerrecords.com