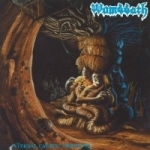 From the speakers emerge a dark and somber atmosphere of crushing and dark Death Metal, together with a stench of a grave closed for almost 20 years, not at all pleasant, but that is what Swedish WOMBBATH sticks in our face with their reanimated, though still decomposed album "Internal Caustic Torments" originally released back in 1993 on Thrash Records, and now brought back to earth by Necroharmonic Records, together with the "Brutal Mights" demo from 1991 and "Several Shapes" EP from 1992. From the first fuzzy chord we are getting sucked into a world of old school Swedish Death Metal with elements that later on would become the trademarks of Texas Death Metal, and of course reeks of CARCASS. This is a crushing and heavy release with some quite catching music. The riffing is intense with a good groove, and the raw and fuzzy guitar tone hits the right things in my world. A balanced and guttural growl spewing forth abominations and gore, it’s gonna be tough to find a more fitting growl for this type of music than this – it actually reminds me of the mighty Joe Ptacek (RIP) from BROKEN HOPE, here and there. Today the release might not seem groundbreaking, and well it wasn’t groundbreaking, as such, back in 1993 either, just pretty darn asskicking, which it still is, but a bit different from much of the other Death Metal released around that period of time, and that makes the release very interesting today. And on top of the album, we also get WOMBBATH’s demo and 7", that’s just awesome – the history of a great band that could have been leaders of their game. "Internal Caustic Torments" is the perfect blend of Swedish and American Death Metal with a healthy dose of CARCASS, and quite some years ahead of itself – it is quite incredible that the release didn’t make more noise back when it was released, as this is quality more or less all the way through. It might not be a 100% tight all the way through, but damn it rocks and contains most of the elements I dig in Death Metal, and I still have a hard time believing it is from 1993, I guess this band could have taken it far, if they had stayed together back then and kept developing the exact style on the 3 recordings on this release. And when you get done exploring and headbanging to WOMBBATH, you might want to check out what could have happened within the world of WOMBBATH, In Thy Dreams where growler Tomas Lindfors and guitarist Håkan Stuvemark continued, and the last mentioned is now back again with Skineater! More info at www.myspace.com/wombbathofficial, www.necroharmonic.com