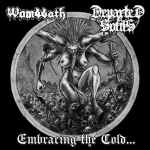 The revived Swedish Death Metal troops of WOMBBATH seem to become experts for split releases. “Embracing The Cold…” is the third release of that kind after their return in 2014 following their 7”es with WARHOUND and REVEL IN FLESH. This time, they teamed up with Dutch DEPARTED SOULS for a CD-EP. And again they saved a fine song for this EP. ‘Embrace Death’ is a song that any disappointed ENTOMBED lunatic will surely enjoy, since it has the same great feeling for dismembering grooves and brutal fast outbreaks. Of course WOMBBATH won’t change Death Metal with this one, but they don’t need to since they already were around when the first wave of Swedish Death Metal conquered the Metal world. In addition, we find another new WOMBBATH tune here with ‘Punisher Of Broken Oaths’, that is marked as a Demo track. And indeed this one needs a little bit of work to become a real killer, yet it’s a nice one as well. Of course, “Embracing The Cold…” also features stuff from DEPARTED SOULS, three songs to be precise. ‘Cold Deep Waters’ appears twice here, both in a studio and a pretty raw live version. This mainly fast and ripping tune is mainly in Dutch Death tradition, reminding me a little bit of early GOREFEST without completely reaching their class. The other DEPARTED SOULS song here is ‘Fear…’ from their up to now only release "Barbaric Tortures", presented here as a so called Pin Head remix. This one is of the same direction than ‘Cold Deep Waters’ and as good as this one, maybe with a little influence of the old school of US Death Metal. So, asides from the to me a little redundant live track, this EP is a nice way to check out both bands, and in my humble opinion, WOMBBATH’s ‘Embrace Death’ alone is worth getting it. So check out www.facebook.com/wombbath or www.facebook.com/pages/departed-souls/199852183551629 for the bands and http://rawskullrecordz.bigcartel.com for the label.