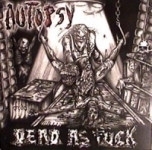 This is a fuckin’ great release! Not only because it is from one of the coolest Death Metal bands we ever had, but also because it features two very good quality live recordings combined onto one single CD! Both sessions were previously already available on vinyl, but there’s some little differences to this CD version nevertheless. “Dead As Fuck” combines the “Tortured Moans Of Agony” double 7″ EP (originally also released on Necroharmonic Records, in two different colored vinyls, but limited to 1.000 copies only), which features material that was recorded live at Bonnie’s Alco in New Jersey on May 16, 1993 plus the “Live From The Grave” (bootleg) LP, recorded live at the Waters Club in San Pedro, California on March 30, 1991. According to Roy of Necroharmonic Records the double 7″ EP tracks even contain a bonus track and all edited talking from the original vinyl now and both sessions were remastered a bit for better sound. So, as a result you get 19 tracks in total of fuckin’ A-U-T-O-P-S-Y!!! The tracklist is comprised by classics of the band from their legendary “Severed Survival” debut up till 1992’s “Fiend For Blood” EP, which means you get quite a good selection of the best AUTOPSY tunes ever written! Even the packaging looks great (very cool artwork and lots of top quality pics by Kurt Hubert!), so everyone into sick, original Death Metal shouldn’t hesitate to order a copy of this CD right away. It sells for $10.00 (US) / $12.00 (rest of the world) from Necroharmonic Records, P.O. Box 1271, Kearney, NJ 07032, USA. All further info you may get from the label’s website www.necroharmonic.com