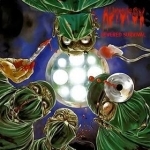 Anyone who has not the stomach for AUTOPSY, has not the stomach for true Death Metal in its purest form. In stark contrast to bands like MALEVOLENT CREATION, DEICIDE, NOCTURNUS and even DEATH, AUTOPSY were snarlingly creepy because of the sickly lilting doom-like tempos they used. That is not to say that AUTOPSY was never fast, for they most definitely could be when they wanted to, but it wasn’t their first priority. Their chief aim was to craft sickening Metal. The world got its first taste of it with "Severed Survival". The likes of it had never been heard before. The disgusting imagery, the puss soaked grit of the bass, the buzzing of the guitars so like flies feasting on the ear wax of a dead body. These, and more were what made AUTOPSY such poineers in exploring depravity through Metal music. Peaceville finally re-released "Severed Survival" on digipak in 2003. Now, they’ve re-packaged it yet again, only this time with content they neglected to include on the last edition. This time around, you also get the 2 new tracks off the limited "Horrific Obsession" 7" from 2008 as well as 13 live and rehearsal tracks on a bonus disc. These tracks are an exemplary additon to the album itself, and really should have been on the first digipak six years ago. Disc 1 features the same 3 bonus tracks that already were on 2003’s edition: ‘Funereality’ (from the Peaceville compilation album "Volume 4"), ‘Destined To Fester’ and ‘In The Grip Of Winter’ (both from the "Retribution For The Dead" EP). This re-release also features both cover artworks (incl. the banned one) on the cover and booklet respectively, some additional art inside, the original vinyl innersleeve photo collage, all lyrics as well as old gig flyers and pics and an interview with Danny, Chris and Eric. Essential. www.peaceville.com