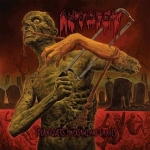 In May 2011, "Macabre Eternal" proved to be exactly the monumental tomb crusher I had hoped for as a comeback album for Cali’s AUTOPSY who are the finest embodiment of Death Metal for me. The gore, the gloom, the doom, the darkness, the horror, the aggression. You find it all in AUTOPSY’s vast catalogue and 2013’s "The Headless Ritual" was probably the first album earning them the well-deserved laurels for keeping their Death Metal as "real" as it gets. While "The Headless Ritual" marked the first AUTOPSY album with a well balanced, up to date sound, the songwriting was a bit weaker compared to "Macabre…" and now "Tourniquets, Hacksaws And Graves" rears its ugly, malformed head already a year later making me worry if AUTOPSY are not acting a little too quickly. Production-wise, AUTOPSY have apparently found their sound, picking up exactly where "The Headless Ritual" left off ensuring a transparent, heavy approach that never ever comes across sterile. Kicking off with the 2min+ opener ‘Savagery’ with its wonderful homage to ‘Twisted Mass Of Burnt Decay’ proves to be an excellent start and the opening triple consisting also of the slower ‘King Of Flesh Ripped’ and the lunatic title-track is just perfect. ‘The Howling Dead’, another crawling, dramatically intensifying track took a few spins to grow on me but in the end Chris’ utterly manic vocal atrocities did the trick. Faster numbers such as ‘After The Cutting’, ‘Forever Hungry’ and ‘Parasitic Eye’ however appear too standard to really convince the critical madness of an AUTOPSY maniac due to feeling a bit arbitrarily splattered on this platter and lacking the stunning hooks of a ‘Ridden With Disease’ or ‘Seeds Of The Doomed’ (for me the best song they’ve done since 1992). Still, the atmospheric instrumental interlude ‘All Shall Bleed’ injects another healthy reference to "Mental Funeral" followed by an amazing AUTOPSY "ballad" entitled ‘Deep Crimson Dreaming’ which will give you the f**king creeps if you are not dead already. It will make you dream of killing other people and loving it. The sinister doom track ‘Burial’ pales in contrast to its predecessor but definitely has an utterly dark and macabre feel. Yet, it is the new band hymn ‘Autopsy’ that ends the album on a high note with another, very memorable highlight quoting lyrics from AUTOPSY’s long and murderous history and mounting in a top class growl-a-long chorus. Overall, "Tourniquets, Hacksaws And Graves" might have a few redundant songs and I would have wished for a slightly higher dose of doom assaults but still this is a mandatory AUTOPSY album just like every album these fiends for blood have ever done. ‘nuff said. www.autopsydeathmetal.com, www.peaceville.com