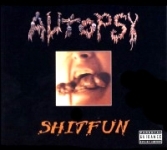 Continuing with the styling that made “Acts Of The Unspeakable” a largely hit or miss affair, AUTOPSY put the remainder of their new ideas into “Shitfun”, their last album as AUTOPSY before reforming as ABSCESS. “Shitfun”‘s title was, and is, strange even for AUTOPSY, and the album was greeted with less applause than the first three. It is, by far, the least AUTOPSY like AUTOPSY album. It has more in common with ABSCESS’s “Urine Junkies” compilation than anything else, and since ABSCESS is essentially AUTOPSY at Mach 3, there really shouldn’t be much to give any fan much to gripe over. The kind of change AUTOPSY went through from “Mental Funeral” to “Shitfun” is rather like MORBID ANGEL’s change from “Covenant” to “Formulas Fatal To The Flesh”. The music is instantly recognizable, but different enough to give a few fans pause. Unlike MORBID ANGEL, however, who got progressively more eclectic lyrically, AUTOPSY went in reverse, and sang, predominantly, about shit on their last album, as the title no doubt suggests. That is very likely the chief reason for the album’s decidedly low ranking amongst fans. As seriously as anyone can take gore lyrics, lines focusing on fecal matter are even less relatable. Nevertheless, the music remains the most important. “Shitfun” is a faster, more MASTER and REPULSION driven album than the previous three, which were entirely of Chris Reifert’s masterful originality. You could call it the first ABSCESS album, if you wanted. Peaceville’s latest edition comes as a digipak that features the lyrics as well as several live tracks, taken largely from the “Mental Funeral” and “Severed Surival” setlists.There are two or three songs from “Shitfun” included in the live material, but digital technology being what it is, those of us who feel “Shitfun” too much of a departure may skip over those tracks and focus on what everyone may agree was the real AUTOPSY, a twisted mass of burnt decay. The album is a very underrated listen regardless of the band you associate it with, be it AUTOPSY or ABSCESS. www.peaceville.com, www.myspace.com/autopsyfansite.