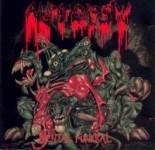 Wuhahahaaaaaah! It is in the meantime already over twenty years ago since the second album by AUTOPSY – "Mental Funeral" – was released. With the new interest in the band – thanks to their reunion and the brilliant album "Macabre Eternal" – it seemed the perfect opportunity for Peaceville to release a re-issue of this album. And what an extraordinary portion of death and vermin this album still is! On "Retribution For The Dead" – the EP which was released a few months before "Mental Funeral" – you could already hear that AUTOPSY started to put way more doom parts in their music. These new influences are really put very much to the front on "Mental Funeral" but there is more. Much more. "Mental Funeral" is – we weigh our words – maybe even the highlight in the career of AUTOPSY and there are several reasons for this. Pure musically seen, "Mental Funeral" is maybe AUTOPSY’s most versatile record. It is an album that really has no dull moments, because there’s so much variety in the material. There are very grim and almost to pure sludge and doom tending songs (‘Robbing The Grave’, the wonderful ‘Torn From The Womb’, ‘In The Grip Of Winter’), very ‘cosy’ and at the same time rather sick stuff (‘Slaughterday’ or ‘Dead’, which reminds a lot on old PARADISE LOST) to rather fast stuff where the band doesn’t look left or right and just goes full speed ahead (‘Bonesaw’). At the same time, there is a groove in most of the material here which makes the songs – believe it or not – almost catchy in a certain way. The vocals of Chris Reifert are also really terrific on this album and range from truly terrifying screams to the most rotten rumble which seems to rise right from a stinking grave. The sound and the production of "Mental Funeral" is also very special, especially if you keep in mind that at that time most of the Death Metal bands either went to the Sunlight Studio or Morrissound. "Mental Funeral" sounds somehow very ‘dry’, the sound is totally stripped down to the absolute essence and makes the album somehow sound more like a good sounding demo and yet it totally works here. And you have to admit, if you take a look at the artwork of the album, as a Death Metal fan you can’t do anything else than start to smile and grin. "Mental Funeral" is an honest, brutal, raw and yet at the same time really creative album which hasn’t lost anything of its impact after twenty years. It is simply put an essential album in every Death Metal collection. "Mental Funeral" was also a big influence to many Swedish Death Metal bands. A band like DISMEMBER for example has very well listened to "Mental Funeral". Just as with their live album "Dark Crusades", this re-release has an additional bonus DVD with two bootlegs on it (total playing time: 80:01min), more specifically a gig recorded in Rotterdam in 1990 and a concert recorded in California in 1991. Both recordings have been going around in the tapetrading circuit already for quite some years but are now hereby also officially released. Of course you can’t really compare these bootlegs to truly professional recordings when it comes to image and sound as these concerts were filmed with a single camera by someone in the audience. Nevertheless, the image and especially the sound of both performances is remarkably good for a bootleg, especially when you consider how old these recordings are in the meantime. It also gives a good idea of the atmosphere of the early live-performances of AUTOPSY. More info at www.autopsydeathmetal.com and www.peaceville.com.