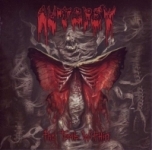 I doubt if most of us get very excited these days when we hear that yet another classic band has reformed to play more shows or release new recordings. After witnessing numerous colossal failures, I am always skeptical of these resurrections. Consequently, I approached the AUTOPSY reunion with a similar skepticism. However, even in this skeptical frame of mind, I also knew that if any band could pull it off, it would be AUTOPSY. First of all, most of the members of the current incarnation of AUTOPSY have remained active in the underground through the years with ABSCESS being the most obvious achievement. Indeed, it is the inclusion of Eric Cutler who is the only member who did not play on ABSCESS recordings that makes this an official AUTOPSY project. Secondly, they released two new tracks last year that, although they did not receive the same level of attention as this MCD, were nonetheless solid AUTOPSY songs. In the weeks prior to their performance at Maryland Death Fest this year, I sat in on an AUTOPSY rehearsal and, listening to their set, I realized this really was a genuine AUTOPSY performance. Unlike most reunions, this was not an attempt by older musicians to imitate their younger selves or to chase, pathetically, the recent trends. After all, even the equipment they use is still the same (just watch AUTOPSY’s "Dark Crusades" DVD and you will notice that Danny Coralles has been playing the same beat up guitar for decades). So by the time I heard the new tracks, I was perfectly aware that AUTOPSY had the ability to channel their old sound, but could they compose new songs that emit the odor of decay and death in the way they used to? After listening to "The Tomb Within," the answer to that question is undeniably in the affirmative. The 5 tracks on the MCD possess all of the essential sonic and compositional elements that are intrinsic to every AUTOPSY recording from the past. The riffs, vocals, solos, maniacal drumming, flawless transitions, and generally demented songwriting that defined the band’s sound are all present here. Opening the MCD is the title track which begins with a fast, sadistic onslaught that descends (in characteristic AUTOPSY style) into a sickening doomy passage before once again speeding up to close out the song. The ability to change tempos and merge seemingly impossible riffs together with ease has always been part of AUTOPSY’s signature. They prove here that they have not lost this ability. Following the title track, the next two songs, ‘My Corpse Shall Rise’ and ‘Seven Skulls’, flow in the same vein, but with each song displaying unique turns. This uniqueness is a testament to the songwriting ability of the band. Even though they use the same sounds and techniques, they manage to add just enough deviation to each track to make it stand out. The fourth track, ‘Human Genocide’, was originally the opening track of the "1987 Demo" and is one of only two demo tracks that were not re-recorded for "Severed Survival". For "The Tomb Within", AUTOPSY provide a newly revisited version of ‘Human Genocide’ as if to offer a point of comparison between old and new. While the earlier version feels more aggressive and out of control, the version presented here is slightly more restrained, but no less effective. The vocal style also differs greatly. At the time of the first demo, Reifert’s vocals were more shrill and piercing. He had already adjusted to a more guttural sound by the time of "Severed Survival", however, and has continued to evolve throughout the years. The vocal delivery on this mini-album is more similar to his vocal performances on more recent ABSCESS releases. ‘Mutant Village’, the last track on the MCD is the most interesting of the five. With this slow and thoroughly demented track, AUTOPSY once again demonstrate that they are the masters of Death Doom. After building up some five minutes of impenetrable brooding death, the band ends the song and the album with a furious guitar lead outro that leaves the listener craving a full length release. I have heard naysayers who claim disparagingly that these tracks fail in that they are more similar to ABSCESS or "Shitfun" – era AUTOPSY. The obvious response to this is to say that it is incorrect, and even if it were true, that doesn’t denigrate the value of this record at all. However, the tracks here do fall well within the stylistic parameters of "Severed Survival" and "Mental Funeral". The heavy presence of doomy riffs juxtaposed with spastic mania is evidence of that. "The Tomb Within" is a well-composed amalgamation of the entire AUTOPSY catalog and is an appropriate step forward for the band. For anyone expecting another "Severed Survival" or "Mental Funeral", these are ludicrous expectations. Those albums were a product of the time, place, and the juvenile passions of some kids inspired by the emergence of a new era of metal. What AUTOPSY have done here is prove that, in the last 20 years no one else has come close to toppling the masters of gore drenched Doom Death Metal, though many have tried. AUTOPSY’s return and effortless ability to recapture this sound is further proof that their legacy cannot be touched. www.myspace.com/autopsyofficial, www.peaceville.com