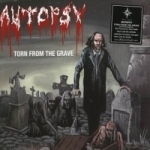 Be warned… under-estimate AUTOPSY’s vile majesty and there are people in this world who would have you hung form the highest branch. And I indeed am one such sicko. AUTOPSY were the pustulent gaping wound, the thorn in the side of the early 90s Yank Death Metal scene, giving two fingers at the entire Morrisound brigade almost single-handedly. Where they went for slick production values AUTOPSY scaped the barrel and produced something primal and raw, with undiluted live energy, dark and sinister in a very real way. Taking some influence from bands like TROUBLE and CANDLEMASS added painful slow twisted passages amongst the carnage and enabled them to stand out even more. Mix that in with the breakneck insanity of the rest of the music and you get an engaging spectacle… kinds like a car crash! It is really hard to explain what a genuinely individual band AUTOPSY were and how especially with their second album "Mental Funeral" they practically redefined a genre. Lately the legacy of one Chris Reifert has been coming closer and closer to the surface like some prematurely buried abomination gasping for air, THE RAVENOUS, ABSCESS and now this all vying for the sickest spot. My vote for one will always be with AUTOPSY. And this compilation as with the DARKTHRONE looks great as well and has some demo tracks and various bits and pieces that make it more than worth your while picking it up and I must commend them for that, it does however show how the band began to loose it after "Mental Funeral" with the following albums "Acts Of The Unspeakable" and "Shitfun" but "Torn From The Grave" is an awesome legacy to behold and for thousands of sick minions around the world it may just make their day that little bit darker.