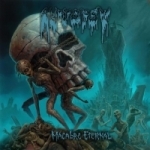 They’re back! The masters of filthy, fucked up, deranged and demented doomy Death Metal, Californian legends AUTOPSY, did not only go for the all too typical modus operandi – cash grab via reunion shows – but decided to walk the left hand path until its end by delivering not only the highly entertaining “The Tomb Within” MCD but also an over one hour long comeback album. Fortunately, I must say with uttermost conviction, since I did not expect AUTOPSY to strike back from the grave like the most vicious, bloodthirsty Death Metal zombie you can imagine after all these years! Whereas another legendary band, MORBID ANGEL, delivered a massive fail with its much talked about new album, AUTOPSY manage to not just come up with a run off the mill record but spit out a morbid opus that has energy, inspiration, diversity, inventiveness and all the band’s trademarks oozing from every wound, I mean, song. On their first album in 16 years, Chris Reifert pukes, growls, gurgles, screams as bizarre, frightening and intense as ever turning him into a vivid story-teller of very sick and morbid tales of murder and depravity (i.e. ‘Dirty Gore Whore’, the epic 11min long ‘Sadistic Gratification’). The riffs venture seamlessly from tormenting BLACK SABBATH / SAINT VITUS fuelled doom to faster, driving passages with that rancid old school Punk flair whereas the leads prove again just how much feel and vibe this band has, the duo Coralles / Cutler deserves nothing but pure adoration! Even some acoustic guitars sneaked into one track (‘Bridge Of Bones’) increasing its twisted sickness whereas the stunning opening song ‘Hand Of Darkness’, the catchy Death Metal hit ‘Seeds Of The Doomed’ (that guitar melody is incredible), and the punishing ‘Born Undead’ are excellent examples of quicker, straight to the f**king face AUTOPSY material. ‘Spill My Blood’ and ‘Bludgeoned And Brained’ are the only unspectacular, forgettable tracks on this album, but they can not change the fact that the quartet has come up with the strongest record since “Mental Funeral” (though I absolutely love “Acts…” as well). Production-wise, AUTOPSY fortunately remained perfectly imperfect with an honest, down-to-earth, dry and pure sound that might have been even a bit filthier for some, but I love it the way it is. Having disputable productions was always part of the fascination for this band. Just imagine “Mental Funeral” being a standard Morrisound recording – that might have ruined the entire atmosphere of the record! When you put AUTOPSY 2011 into the context of today’s Death Metal scene and compare “Macabre Eternal” with all these “new old school Death Metal” bands’ releases, it becomes quite obvious that the experience and artistic skills of AUTOPSY outdo most, if not all of them. Cosmo of Invisible Oranges blog (www.invisibleoranges.com) has described their special secret as follows and is absolutely right: “A big part of AUTOPSY’s magic is that they fuel the imagination. Their lyrics are vivid, and their music oozes with vibe. “Death Metal” and “old school Death Metal” are just superficial descriptors. AUTOPSY are those monsters under the bed come to life. They are ‘80s horror movies minus the laughs.” Hell yeah! These guys take you to the mind of a killer and force you to stare at the carnage at the crime scene until you almost taste the blood in your mouth. Whereas a band like ORIGIN or other technical speed freaks might be able to claim the title of being the masters of brutality, the masters of sickness will forever be named AUTOPSY. “Macabre Eternal” makes no exception, it is an ideal, all too fitting title for this opus since it perfectly sums up what AUTOPSY were 1991 and still are in 2011. May they live long and fester! www.myspace.com/autopsyofficial, www.peaceville.com