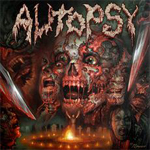 The torture begins in ‘Slaughter At Beast House’. Like a vicious boxer, Mr. Reifert delivers a rash of sadistic beatings right out of the gate, sending a clear message that you are his victim and he will pound you into the dirt before this night is through. Before he gets too far, before this bald maniac lets his wild rage go all the way and his rabid fists hammer your face into a bloody pulp, the body blows abruptly relent. Mr. Reifert steps back and recedes, for now, into the darkness of the chamber. But in his place, two looming forms, previously obscured in shadow, suddenly lurch into view. In that instant, the shock of this insidious program becomes nauseatingly apparent and your bowels release in spasmodic horror at the perverse fate that has befallen you. I cannot give you hope, dear listener, because truth be told, this will be only the first of many such moments of unclean terror that await you should you dare cross this threshhold and enter the realm of the headless ritual. Now, the strange mental games of the vile guitar wizards, Eric Cutler and Danny Coralles, begin, who in a break from one kind of torture, introduce another, in the form of satanic cascading runs in twisted harmony that cruelly mislead the listener into a feverish psychological state. Maybe there is a way out of this hell after all? In a hyperactive hallucination, fresh tendrils of hope grow and unfurl like green shoots, only to whither and decay into ash one after another. These are the sad moments of an all-consuming desperation, the lizard brain’s coping mechanism, fantasies invented once and only at the realization of the closeness of the moment of death. Solo eruptions! Killer! All this within the first 60 seconds! "The Headless Ritual" has everything any real AUTOPSY fan covets. It’s a joy to hear these players still collaborating and obviously enjoying the fuck out of creating such weird and awesome deathscapes. AUTOPSY were always champions of the strange, and so they must remain. If you worship at this verdant jungle spring, where morbid feelings come and go like nightmares, this album has what you need. You know how these heads roll. When it’s fast, it’s thrashing, and that’s exactly when they take a left turn and go really slow. There is time yet still in this life for doom. Now Mr. Reifert is back to torment you, and this time he’s wearing a tattered and yellow puke-stained straight jacket. The drug sick sonofabitch is dribbling spittle and muttering something, now he’s leaning in close to say something to you, so close you can smell his rot. It’s not so much the words as his delivery that’s telling you what he wants you to know – these are the grizzled, guttural yells and bizarre gurglings of an escaped lunatic whose only means of communicating with his victims other than by bludgeoing them in the head is to menace them with the sheer ugliness of his truly peculiar and obviously incredibly uncomfortable personal sickness! Highlights? Behold the track ‘She Is A Funeral’ – as the song peaks, an epic display of guitar tapping gives way to an equally epic section of guitar hammer-ons! That may sound like a load of technique, but don’t allow my observation to suggest that these are merely frizzy indulgences or the showiness of the braggart. Instead they are the vital elements of a musical artistic form that is like a bustling hive of chaos and strange organization. Perfect illustration of this creature double feature comes again in the next track, ‘Coffin Crawlers’, literally beginning with a dual guitar interpretation of the sound of creepy crawlers, ants, worms, maggots infesting the casketed dead. This is the music of visceral feel. Every living cell of this band is underground Death Metal to the bone and that they are alive and creating again at such a level of enthusiasm is pure inspiration. With AUTOPSY now well and truly back, influencing the Death scene once again and infecting us all with their horror worship – keeping their own pure, unaffected, virulent strain fully viable – the whole of the Death scene is that much richer and rewarding because of it. This demands the support of all the sick Death freaks who like it raw, wriggling, and ugly as hell. www.autopsydeathmetal.com, www.facebook.com/pages/autopsy-official/162194133792668, www.peaceville.com