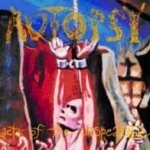 The music that made AUTOPSY so influential on "Severed Survival" and "Mental Funeral" hadn’t completely vanished by the time "Acts Of The Unspeakable" was released. A more definite departure was apparent on "Shitfun", otherwise known as the first unofficial ABSCESS album to some. We all should know what AUTOPSY’s primary formula was. Unbelievably deranged vocals, slow, deep drums that sound like Chris Reifert fashioned them out of human skin, and mostly mid paced, heavy-as-a-thousand-corpses riffs. None of that fled. There are some lightly peppered hints of things to come with ABSCESS, but nowhere near enough to deter a die-hard AUTOPSY fan. What separates "Acts Of The Unspeakable" from the first two records, is the sound. The production could have been far, far better, though it does manage to sound gloomy, a strange thing for AUTOPSY who, to my ears, were never anything except evil, and depraved. Like the other re-releases, "Acts Of The Unspeakable" is now packaged with (ten!) live tracks, and the "Fiend For Blood" EP. Only the truest of the true got to hear the EP when it was hot off the presses. This is a treat for all things Death Metal. The album has received a bit of an unfair rating. On the other hand, it does sound like cotton balls compared to "Mental Funeral". Nevertheless, its a worthy record. Who else does it like AUTOPSY? www.peaceville.com, www.myspace.com/autopsyfansite.