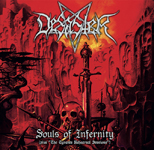 Good old German DESASTER are ready with some new old! Here we get the “Souls Of Infernity” 7” EP from 2001. That EP contains the original title track, their hellish cover version of RAZOR’s ‘Cross Me Fool’ and two live tracks from Wacken 2001. ‘Show Them How’ from “Tyrants Of The Netherworld” and ‘Sataniac’ that emerged on the demo / rehearsal tape compilation “Ten Years Of Total Desaster”! On top of the EP we get nothing less than 10 bonus tracks in form of a solid rehearsal before the recording of “Tyrants Of The Netherworld”, the band’s third full length album released in 2000 by Iron Pegasus. Is it a tad cheap to release a rehearsal of an already released album, as bonus for a re-release of a 7”, so the label can skim a wee bit more money of it? Well, yes it sure is, if you don’t care about a band’s history and progression and the joy of delving into comparing a solid rehearsal with the recorded, mixed and mastered final release. I enjoy the latter, so I find a release like this quite enjoyable and exciting. DESASTER started out playing atmospheric and freezingly cold and epic Black Metal, a style they topped with their debut full length “A Touch Of Medieval Darkness” in 1996. Though when I picked up the next release, the MCD “Stormbringer” in 1997 I got a bit of a shock, as the Teutons now delivered a fiery Thrash Metal attack heavily rooted in the Black Metal past – since then they didn’t look back and have been playing around inside their Black / Thrash Metal arena ever since. Enter the first Black / Thrash full length “Hellfire’s Dominion”, an album which I still have a quite hard time with. The production is funnily muted compared to the intense and kick ass raw production “Stormbringer” had – and some of the intensity is lost in translation, even though there are some good and intense songwriting – and how can we not bow down to a track like ‘Metalized Blood’, a track besides being a kick ass headbanging favorite and a riff fest! A track that is guested by Lemmy (he doesn’t need an introduction, he played Rock’n’Roll!), Wannes Gubbels (he shouldn’t need an introduction, though he is from PENTACLE!) and Thorsten Bergmann (again, no introduction should be needed, but he has been screaming his lungs out in LIVING DEATH, almost longer than I’ve been around!) – a legendary line-up of guest vocalists! The album also features some of the epic songs and parts, which were a big part of “A Touch Of Medieval Darkness”, a feature that brings more traditional Black Metal to the table, which isn’t all bad. Fast forward to 2000 and “Tyrants Of The Netherworld” which this review partly should have been of, though when I first enter memory lane… “Tyrants…” is a quite solid album, a lot of solid Black / Thrashing bangers, some brooding dark and epic atmospheres, just take a good listen to the title track and ‘Battle Oath’, two tracks where the Heavy Metal roots of the band becomes very clear. I think to recall, that I for some reason wasn’t that pleased with the album, when it was released, though it became solid for me within time! The rehearsal of the album’s tracks can’t be far off the recording time, as the arrangements are in place. The main difference between the album and the rehearsal is the rawer and tad thinner sound and a hellish intensity, which is lost in translation on the album, which seems a tad too polished, compared to the rehearsal. Especially the snare drum is fierce, the vocals raw and straight in your face – and the guitar tone, even though most likely the same as in the recording set up, is amped more fierce and in your face here. The 7” is wicked, the title track is slaying with its eerie riffing and wicked guitar leads, pummeling rhythm patterns and fierce vocal attack. The cover version of the Canadian Speed Metal demons RAZOR’s ‘Cross Me Fool’ is even speedier and darker than the original, a real punisher! The two live tracks are delivered with passion and intensity, though suffer from, either a bad scene mix or bad recording capture. It is intense and Okkulto’s vocals are in our face, though the music is a bit in and out, up and down, but the recording captures the hellish spirit of the band! This is a solid release with a sought after 7” EP and the hellish rehearsal of what was about to become a good album. I prefer the rehearsal due to the rawness and sheer intensity, though that is a matter of taste. No matter what, this release is worth the dime if you care just a tad about DESASTER, Black / Thrash and German Metal history! Die in fire: www.facebook.com/666desaster666, www.facebook.com/ironpegasusrecords