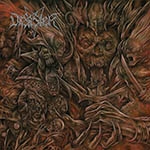 There are a lot of live shows that I wish to have been a part of, sometimes your hear the good stories and episodes from gigs told, or you hear a live recording, official or not, a recording that kicks in your teeth and give you goosebumbs all the way down your back. After a few listens to this double CD attack from DESASTER’s blitzkrieg over Bamberg, their 25 years anniversary show, together with the grandmaster of these pages’ review of the DVD release of said concert, the Bamberg gig sounds like one of those gigs I’ll be kicking myself over missing, even though Bamberg is a good while from here, where I currently is sitting, writing this. I came across DESASTER in the mid-nineties when I stumbled across "Stormbringer" the mini album from 1997, that album kicked me into ectasy with its energetic blend of intense thrashing and some Black Metal parts, I shortly after bought the prior full length album "A Touch Of Medieval Darkness" and wasn’t that impressed with the more pure Black Metal attack the band had prior to "Stormbringer". Though luckily the band stuck with the thrashing madness, and still do, the older releases have grown on me, and are quite charming these days. Though back to this release, that consists of almost two hours divided into 23 tracks from the German madmen, or well 22 DESASTER tunes and a slaying version of, well, SLAYER’s ‘Black Magic’, a feast of a release, if you like this band, or just blackened Thrash. On top of the parade of DESASTER’s back catalogue we are also getting a parade of older members, we get the first line-up with Creator Cassie and Alexander Arz for the obscure tracks ‘God Is Dead’ and ‘Evil Arschloch’ found on the compilations "20 Years Of Total Desaster" and "Ten Years Of Total Desaster". And if not best, Okkulto, DESASTER’s evil incarnation of a hellish vocalist from 1993 until 2001, joins on stage for a good deal of their thrashing Black Metal classics, and last but not least Wannes Gubbels from PENTACLE joins on stage for the last track ‘Metalized Blood’, which he also laid vocals on when it was released on the album "Hellfire’s Dominion", together with Lemmy from VIOLENT FORCE and Toto. A live blast of a release that showcases DESASTER from all the best and slaying sides, an intense tour de force of some of the German’s best tunes, delivered very well and energetic, quite a treat for fans of live albums, DESASTER and hellish blackened Thrash Metal! Join the tyrants of the netherworld: www.total-desaster.com, www.facebook.com/666desaster666, www.hrrecords.de