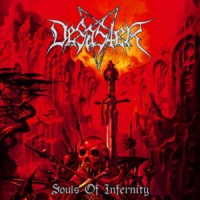 A new DESASTER release, which somehow isn’t thaaaat new anymore, but still interesting enough to get a mention here. This four song vinyl exclusive marks Occulto’s farewell as DESASTER unfortunately had to continue on without him, which is rather sad because this guy really had a unique extreme voice. But it seems the band already knew to convince on the live front with his replacement, so everything will most certainly be fine again. The good thing about this 7" is: as far as I know all of the songs are not available anywhere else! So, if you consider yourself a die hard DESASTER fan you definitely need to make sure to pick up this little piece of plastic. On side one you’ll get two studio tracks that were recorded during the "Tyrants Of The Netherworld" session. The record kicks off with ‘Souls Of Infernity’, a typical DESATER rager of raw old school Black / Thrash, followed by ‘Cross Me Fool’, a very cool cover of Canada’s one and only RAZOR! Side two features the wellknown DESASTER tracks ‘Sataniac’ and ‘Show Them How’, but these versions were recorded live at the Wacken Festival in 2001 – which was not only their 99th gig in total, but also the band’s biggest show ever, if I do remember correctly… The 7" packaging looks pretty cool and is blessed with a great coverart so that you definitely won’t find any lame excuses why you didn’t pick this up by the time it was available. All further ordering info you might get here: Iron-Pegasus@t-online.de