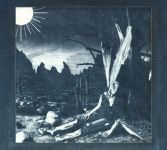 Even though the German Black Metal outfit FUNERAL PROCESSION hasn’t recorded and released anything for a decade now, the East Frisian based brigade is still alive and well, especially on stage. Yet their creative output has come to a contemporary standstill. So we have to be content with a newly released offer of a long sold out rare item. It was in 2006 when K:A:IN Productions released the EP “Schmerz Aus Licht” prior to the up to now only FUNERAL PROCESSION album. Back then, the EP was limited to 99 vinyl 12”es in a cloth bag and 250 CD copies in handmade covers. The EP only featured one song that really differed from the other songs of FUNERAL PROCESSION. It’s the only song of theirs with German lyrics and also their longest one with a running time of 16 minutes. But it also walks a different musical path, as it is much more depressive both in lyrics (‘Schmerz Aus Licht’ translates as ‘pain from light’) and atmosphere. The nearly doomy basic rhythm and the dark, very sinister and eerie break in the middle culminate to a harsh and fast outbreak of pain. And thus it hits even harder. The final lines (‘Do you die with me? Lonely…’) only underline the feeling of calamity and depression. Seen from my point of view and with my musical taste, “Schmerz Aus Licht” is the best FUNERAL PROCESSION created and recorded, really hitting my nerve for atmospheric Black Metal and Doom at the same time. Like-minded Metal lovers will surely dig this one. And they shouldn’t hesitate to grab one of the only 287 copies of the CD, which is housed in a 6-panel digipak that reproduces the original appearance as faithful as possible. Visit https://millennialvisions.bandcamp.com for more, check the usual mailorders (Ván Records and some others) or contact the label: millennial.visions@web.de