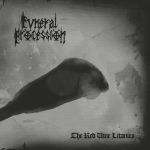 Here we have another fine new edition of an older FUNERAL PROCESSION release through the band’s own label Millennial Visions. Back in 2008, two years after their first self-titled album and the fantastic one-track EP “Schmerz Aus Licht”, the East Frisian Black Metal brigade recorded another long song and released it as an EP. ‘The Red Vine Litanies’ is even longer than ‘Schmerz Aus Licht’ and deals lyrically with the spirit of wine and what it does to human beings. Musically, FUNERAL PROCESSION is deeply rooted in the old school of Black Metal here. I sense a certain early BATHORY vibe, especially in the vocals, spiced with some fragmentary harmonies that remind me of old Norwegian school. Yet this song has certain twists and turns in its long run, of course. After about seven and a half minutes, the song takes a sudden break and a monks choir sets in, praising the spirit of wine in a special way. After a minute, the band picks up again with the choir with a rather doomy part. Again FUNERAL PROCESSION returns to the beat of the beginning before the choir joins in again for the grande finale. And thus endeth another great long song that proves the qualities of FUNERAL PROCESSION, with a great balance between variability and recurrence. “The Red Vine Litanies” is maybe not as great as “Schmerz Aus Licht”, but it’s damn close. So there’s no reason not to get this EP. You need another reason to not only think about getting it? This new edition makes “The Red Vine Litanies” available on vinyl for the first time, single-sided on red vinyl, of course, it’s limited to 287 copies and packaged in a heavy cardboard sleeve with an either heavy double-sided inlay. And it’s remastered and restored just for this release, too, by the masterful hands of Patrick W. Engel, so be sure the vinyl sounds great! If you still need to get your own impression, visit https://millennialvisions.bandcamp.com. And to get a copy, you might check the usual mailorders or contact the label at: millennial.visions@web.de

I was a little worried at first when I got the information that the new FUNERAL PROCESSION MCD would only include one single track with a playing time of approximately 20 minutes. Ok, the band already did something like that before (with their “Schmerz Aus Licht” EP) and other acts, such as LUNAR AURORA or Sweden’s PEST, have also proven that the combination of grim Black Metal and lengthy songwriting can work pretty easily. Nevertheless, a little bit of skepticism remained, especially considering the release’s title “The Red Vine Litanies”, which I immediately started to associate with moody / avantgarde / experimental type music and the dark, yet a little unusual styling of the digipak. Well, in the meantime I have listened to the song often enough to tell you that I was luckily completely wrong here. FUNERAL PROCESSION haven’t changed a single bit and still deliver their brand of Black Metal in the northernmost tradition. The first part of the song kicks off very intense and therefore should easily please all traditional Black Metal diehards… then it suddenly stops and a monk type choir starts for a couple of minutes (in Latin) only to return to the actual overall grimness again (a bit more midpaced than in the beginning though). The highlight of the song definitely is the combination of those two different elements towards the end of the disc (Black Metal with a choral choir in the background). Very cool! Considering the fact that ‘The Red Vine Litanies’ basically comprises of three segments, I personally would have preferred to get the opportunity to select them individually on this MCD, but unfortunately that isn’t the case here… Oh well, you can’t please everyone… Apart from that, a highly recommended release. For ordering information check out www.van-gbr.de, all band related info you may find at the band’s website www.funeralprocession.net