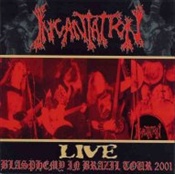 This may sound paradoxical, but the better INCANTATION studio album could be this live one! More than often in the past, INCANTATION were plagued by constant line-up changes and mediocre production of their albums. John McEntee and cohorts always came up with class material, an original and furious brutal death/doom, but to me the recording process never did them justice. That is until this live album recorded in Sao Paulo in may 2001, when the band toured Brazil extensively (with REBAELLIUN I think). I have to precise to you that “Blasphemy In Brazil” is not a cheap bootleg, but a real official product, restricted to 2,000 copies. What stroke me the most while hearing this for the first time was the superb sounding quality of the 16 (!!!) real tracks on offer here (covering the band’s entire career), obviously the recording was made straight off the sound board. The winner on this is certainly drummer Kyle Severn, one of the “historical” INCANTATION members, which beneficiates the most of this miraculous sound clarity, certainly for the first time. I am not a specialist when it comes to the INCANTATION discography, but I am pretty sure most of the tracks sound better here than their studio version (though I am certainly sure of this for the songs from “Onward To Golgotha” and “Mortal Throne Of Nazarene”!). Along with founding member John McEntee you will find also on this another “historical” INCANTATION member Mike Saez and again, a miracle, his vocals sound perfect, basic but clearly audible growls! At last, INCANTATION appear with a proper sound that compliment their excellent tracks. Note also that the booklet is simple but beautiful, with cool pictures of the four musicians in action. Get this while you can! Sorry, but no e-mail contact with Mutilation Records. Try their snail mail address: Caixa Postal 730, Sao Paulo-SP, CEP 01059-970/Brazil, or visit the INCANTATION website at: www.incantation.com