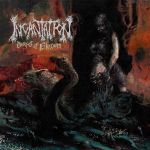 Long running and highly influential Death Metal act INCANTATION has returned with its new album “Dirges Of Elysium”, which already raised my expectations to maximum just by gazing at the stunning cover by Eliran Kantor (TESTAMENT). From the tension of its instrumental title-track over the storming ‘Debauchery’, Death / Doom monuments like ‘Carrion Prophecy’ or ‘From A Glaciate Womb’, crushing faster tracks like ‘Dominant Ethos’ to the closing, overlong ‘Elysium (Eternity Is Nigh)’ this is 666% true INCANTATION. Yet while upholding, occasionally topping the musical and compositional class of 2012’s "Vanquish In Vengeance", which was a damn fine opus to me, the excitement I felt back then, now pales slightly in comparison since a sort of schizophrenic emotion takes control over me. On one hand, there is still the fan-boy yelling “hell yeah, f**kin’ INCANTATION rules forever” while on the other the critical-minded part of my messed up brain says “something is missing”. If I have to point my finger at it, it comes down to the polished Swanö mix and mastering as it a) lets the band’s technical limitations shine through more b) sacrifices the murky mystique that blessed them with a massive cult status over the past 20+ years and kept all doors to a bigger audience tightly shut. Compared directly with obviously INCANTATION inspired acts like DEAD CONGREGATION the diehard fan inside of me misses the rotten, obscure and almost “live” sounding touch. The very likeable remaining founding member John McEntee definitely has not lost his songwriting abilities but INCANTATION anno 2014 come across less impure, less pleasantly wrong in terms of production. While I openheartedly appreciated a more fresh approach on "Vanquish…", "Dirges…" makes me realize it further hones a contradiction between the band’s legacy and sonic presentation. Bottom line is: get this, because it is INCANTATION and not some average, useless clone, ideally grab the vinyl as the cover will look killer and turn down the treble when listening to it to bring back the murk! And hopefully, for the next opus, INCANTATION decide to go for a livelier, more abrasive sound again – e.g. AUTOPSY managed to find a great harmony between punch, transparency and rottenness on their last two albums – since despite all of above criticism, I’m glad these lads are still around! Throughout all the music business related hardships, line-up changes and personal issues like the health problems of John’s wife, these guys bravely kept battling, which deserves nothing but respect and maximum support. So, maybe "Dirges…" needs a while to fully unravel its class to me, checking it out should be mandatory for any reader of this site though! You can check out the track ‘Carrion Prophecy’ here. More ino at www.incantation.com, www.facebook.com/incantationofficial, www.listenable.net