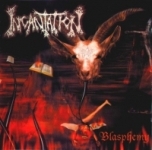 INCANTATION – spreading their musical blasphemy around the globe since 1990. Never have they accepted any compromises, never giving the masses anything else but Death Metal. This fact made them one of the most important and powerful acts of the Death Metal genre! This time blasphemy can be taken literally. This over length album (73 minutes!!!) features again nothing but pure lifeless Metal, the way it should be played – brutal, with sheer power and lots of feeling! The only bad thing I have to add here is the sound, which is a bit washy, making some of the guitar lines impossible to reconstruct. But last but not least this just makes these recordings so sympathic, so back to roots, SO REAL!