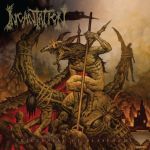 INCANTATION are one of my favourite bands, there’s no doubt. The quintessential underground Death Metal band, formed in New Jersey in 1989 by two of the most important Metal artists from the USA, John McEntee and Paul Ledney, both of whom had previously played together in REVENANT. Then Ledney left the band and founded the best American Black Metal horde ever: PROFANATICA. And meanwhile McEntee continued his demonic creature, enlisting some of the most talented musicians of the American underground scene, such as Will Rahmer, Craig Pillard, Kyle Severn, Jim Roe, Ronnie Deo and Daniel Corchado, just to name a few. You could talk for hours about INCANTATION’s career, their masterpieces etc. I saw them live a couple of times and they’ve never disappointed me. A cult band with a unique sound: a putrid and brutal mixture of old school Death Metal and claustrophobic Doom Metal. A gloomy and rotten style, often imitated but never equalled. I’ve always seen INCANTATION as a version of AUTOPSY on steroids. Their legacy is already legendary and this new compilation released by Relapse Records proves it. “Tricennial Of Blasphemy” celebrates 30 years of one of the most influential and iconic Death Metal bands ever. A total of 31 songs for almost 132 minutes. The cover artwork is painted by Wes Benscoter, a name that is a guarantee of sickness. The collection contains songs from all eras of the band, that previously had just been released on vinyl 7″es, compilations, tribute albums, soundtracks, promo tapes or demos. Exclusive to this release are 2 previously unreleased new tracks and 7 unreleased live tracks from 2010 to 2014. There are so many killer tracks here, especially those from the past. Classic songs like: ‘Profanation’, ‘Devoured Death’, ‘Deliverance Of Horrific Prophecies’, ‘Unholy Massacre’, ‘Ethereal Misery’, ‘Nefarious Warriors’, ‘Impending Diabolical Conquest’, ‘Forsaken Mourning Of Angelic Anguish’, ‘Entrantment Of Evil’, ‘Eternal Torture’ etc. In conclusion this is a pretty interesting collection to pay tribute to a cult band. Morbid and obscure guitar riffs, an intricated and very well played drumming, ultra low guttural growlings and satanic themes. INCANTATION are the purest form of blasphemy made music. There’s nothing more to say. www.facebook.com/incantationofficial, www.facebook.com/relapserecords