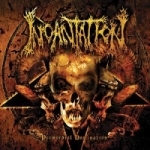 I was eagerly waiting for this release for quite some time now and I must honestly say that if you are an INCANTATION worshipper like me you’re going to love it fiercely. This is what we can always expect from the INCANTATION guys (whatever their line up actually is!) but this time around they have added a little bit of variety to the songs and an outstanding production. If you old school Death Metal purists started breathing heavily when I said “variety” just relax because INCANTATION have maybe twisted the formula just enough to not deviate from their infernal roots and at the same time keeping themselves relevant to the scene. One of the biggest improvements at the first glance is John McEntee’s (vocals / guitar) vocal performance. I can safely say that it’s way better than on “Decimate Christendom” (which also was OK) but adding more feel and adding those vomit-like endings to certain phrases during the songs in order to enhance the listening disgust! There is no need to say that the overall quality of the songs this time around will make watery eyes to INCANTATION copycats that once and for all should learn how REAL DEATH METAL is played. Recommended songs? The whole album has been crafted to be enjoyed beginning to end poor ignorant! So, act fast because the first 100 copies come with a free signed poster, patch and stickers and there will also be a limited first pressing with exclusive bonus live DVD (live in Paris). Get it at: www.incantation.com.