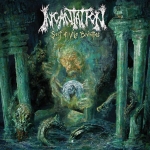 Death Metal veterans INCANTATION surely don’t need an introduction to any self respecting Death Metal fan, especially those who love their Death Metal with its rotten roots firmly in the old school and swathed in darkness, morbidity and in league with Satan. INCANTATION have remained extremely consistent since their debut album “Onward To Golgotha” was unleashed way back in 1992 and have never strayed from their initial musical morbid vision, delivering the deathly goods with each release, becoming predictable but always reliable, remaining true to their roots and fans over the past three decades which deserves a lot of respect. So, what does this latest ominous opus offer? Well, as expected there are plenty of uptempo parts mixed with slow crawling doomed passages that has become such an integral part of their sonic savagery and a definite INCANTATION trademark. The tempos changing gears throughout which definitely makes things interesting, the compositions taking you through many musical twists and turns dragging you deep into the aural abyss. The chaotic and cavernous riffs unfold out of the speakers coiling themselves around you, from the uptempo tremolo picked parts to the slow doom influenced sections where they evoke the likes of classic CANDLEMASS in places and the trademark pinch harmonics make appearances throughout too. The drumming is impressively tight and powerful, longtime member Kyle Severn delivers the percussion with potent precision with the bass of Chuck Sherwood locking in with the drums to create a very anchored and solid rhythm section and the low end is gloriously heavy. The lead work of newest member Sonny Lombardozzi must be mentioned too, he unleashes the leads with a furious finesse and his style fits perfectly. The growls of frontman John McEntee are as deep and demonic sounding as always, sounding like a possessed beast bellowing and growling blasphemies from beyond the darkness. Swedish Death Metal supremo Dan Swanö has worked wonders with the production on this album, contributing his mixing and mastering skills which gives the overall sound a lot of depth and making the end result sound absolutely massive and weighty. “Sect Of Vile Divinities” is more of the same grotesque, grimey, majestically malevolent Death Metal darkness which will devour your soul and possess your senses with its sonic sermons of morbidity. INCANTATION deliver more horrific prophecies upon your ears. The epitome of Death Metal Darkness! More info you will find at www.facebook.com/incantationofficial, www.relapse.com