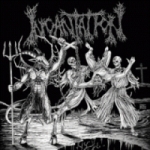 There is little that needs to be said about this release… writing about INCANTATION recordings from this time period seems unnecessary since anyone who cares about Death Metal likely already appreciates the importance of a release such as “Blasphemous Cremation”. There are so few bands that have ever even come close to rivaling the darkness and brutality that was achieved by the original INCANTATION line-up. Thus, upon hearing that Necroharmonic had released a collection of alternate recordings of six of the tracks from “Onward To Golgotha”, I immediately purchased it. The CD packaging features decent Chris Moyen cover art unique to this release and the booklet and tray card contain an array of early and rare photos of the band. And while all of this makes the CD presentation visually satisfying, I would have preferred a little bit more information about the recording. The only real informative text provided is: “Recorded in early September 1991 and shortly after erased.” This lack of text is probably my only complaint about the release and it is a minor one, for any dissatisfaction I may have had with the liner notes was surely outweighed by the diabolic glory of the music. Admittedly, I am in the group of people who prefer the doomier sound INCANTAION achieved on their second album, “Mortal Throne Of Nazarene”. Nonetheless, “Onward To Golgotha” is very nearly a perfect album and is certainly one of the best and most important Death Metal albums ever released by almost anyone’s standards. When it was released in 1992, “Onward To Golgotha” established INCANTAION as perhaps the darkest Death Metal band from the U.S. Even at the time of their demos, INCANTATION was cultivating a style that no one has been ever able to fully emulate. Featuring nightmarish and intense fast paced Death Metal passages that regularly decompose into dense and horrifically slow Death-Doom riffs, with “Onward To Golgotha” (and especially later on “Mortal Throne Of Nazarene”), INCANTATION established a blueprint for U.S. Death Metal that differed from the Florida sound in that it focused on dynamic variation between fast and slow parts and just generally sounded more evil. McEntee’s style of writing riffs evolved out of his work with REVENANT and the riffs utilized for early INCANTATION bear resemblance, in some ways, to the wickedness of those written by Paul Ledney for PROFANATICA (Ledney was one of the founding members of INCANTATION though, to my knowledge, he never appeared on any recordings). Interestingly, McEntee also perfected the use of pinch harmonics. While many, if not most Death Metal bands overindulge in them, McEntee maintains a tasteful use of pinch harmonics that has become, in many ways, his signature. The perfect union that made early INCANTATION so phenomenal, however, comes from the inclusion of Craig Pillard’s vocals. No vocalist in Death Metal has ever achieved so suffocating a vocal delivery as Pillard. Producing deep and drawn out utterances that truly evoke the essence of death and decay, Pillard attained a sound unlike any other vocalist. So low and inhuman, his vocals often sound more like an additional instrument. Of course, it would be blasphemous to fail to mention the holocaust of low-end brutality provided bassist Ronny Deo and drummer Jim Roe which especially characterizes the slower parts of the songs. My only concern before listening to this alternate version on “Blasphemous Cremation” was that it would be of such inferior production quality that there would be no reason to ever listen to this rather than the actual album. My concerns were quickly set aside as soon as the CD began playing, however. This recording, supposedly originally intended to be released as a split with AMORPHIS, is just as listenable as the actual “Onward To Golgotha” album. “Blasphemous Cremation” has a slightly rougher sound quality than the album version. In spite of this roughness, the recording here on “Blasphemous Cremation” actually has a better low end mix than the album and the slightly overdriven and blown-out sound accentuates the aggressiveness of the songwriting more so, in some ways, than the recording used for “Onward To Golgotha”. For historical purposes, the effect of a release such as this is profound; however, I must stress that it is NOT simply for historical purposes. It is imminently listenable and stands on its own when compared to “Onward To Golgotha”. Anyone who worships at the altar of INCANTATION will admire this recording both as a glimpse into the history of this legendary band and as a collection of demonic hymns worthy of repeated listening. I simply cannot stress enough how impressive this release is… now if it could only receive appropriate vinyl treatment. www.necroharmonic.com