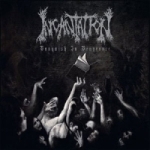 Six years, six goddamn years without a new album by dark Death Metal masters INCANTATION. Now, things are about to change with the release of the band’s devastating new opus, “Vanquish In Vengeance”, which comes out at a time where the influence of the long running act is as present within the Death Metal underground as never before with bands like DEAD CONGREGATION, NAR MATTARU, FATHER BEFOULED, ENCOFFINATION etc. picking up the gloomy combination of abysmal Doom and almost grinding Death Metal brutality INCANTATION fathered in the early 90s and perfected most notably on the all-time classic “Onward To Golgotha”. Plagued by regular line-up struggles and productions differing quite substantially in terms of quality, in 2012 the future looks way brighter for remaining founding member John McEntee (vocals, lead guitar) and his minions Alex Bouks (guitar), Chuck Sherwood (bass), Kyle Severn (drums) with an increased amount of live shows even in Europe this past Summer, a very powerful sound courtesy of Mars Recording Compound / Bill Korecky and mix / mastering by the legendary Dan Swanö plus an intensity and abrasiveness I actually missed on the otherwise solid “Primordial Domination” and low-point in the band’s career: “Decimate Christendom”. While INCANTATION never failed to deliver punishing songs, the thick and bassy darkness of their cult albums was somewhat sacrificed to a straighter approach that could not fascinate me as much as “Onward…”, “Mortal Throne…”, “Diabolical Conquest” and even the more technical “The Infernal Storm” (‘Sempiternal Pandemonium’ is still one of the finest tracks they’ve ever created) and again more traditional “Blasphemy” (a killer album if you ask me!) did. In 2012, the bizarre riffs, sick harmonies and devouring deep growls are back in full swing, inviting you to an unholy massacre whose highlights augment with every spin. No matter if it is faster numbers like ‘Progeny Of Tyranny’ or the title track or the more doomy ‘Transcend Into Absolute Dissolution’, this opus delivers many outstanding tracks and restores the relevance and urgency of INCANTATION. “Vanquish…” culminates in the absolutely crushing final triple consisting of ‘The Hellions Genesis’ with its palm-muted mid-tempo headbanging riff – a pretty unusual element for INCANTATION – the brutal and catchy ‘From Hollow Sands’ and the 11min funereal doom piece ‘Legion Of Dis’, which despite lacking a blasting finale as in ‘Unto Infinite Twilight / Majesty Of Infernal Damnation’ (from ‘98s “Diabolical Conquest”) shows how well John can go all the way “Pillard-ish”. Accompanied by morbid SABBATH-ian riffs the album’s finale is as stunning as the whole record which is easily the best album since “Blasphemy” from a compositional point of view and best since “Onward…” in terms of production. As the “old school” tag meanwhile often is an excuse for “no ideas”, INCANTATION anno 2012 show that their “roots Death Metal” perfectly honours the band’s own legacy while sounding fresher and more on fire. An approach that paid off for AUTOPSY recently, too. Overall a great album underlining that INCANTATION in this form can prevail for ages to come – if they don’t let us wait soooo damn long again and save the production as a preset forever, hehe! Check a song here; order it here: www.listenable.net