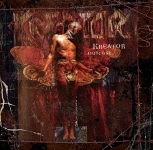 I still remember the day this came out. I was excited since KREATOR was one of my top ten Thrash acts ever. I remember listening to ‘Phobia’ on the radio and thinking “hey, this sounds like KREATOR, but not the one I knew”. I really enjoyed “Cause For Conflict” (shit, Joe Cangelosi from WHIPLASH made a great work on drums!), an album that impressed me at the time in an era where almost every big 80s Thrash act was doing some kind of more accessible music to the masses (MEGADETH, ANTHRAX, SEPULTURA, etc.) or simply disbanded (DARK ANGEL, SACRIFICE, DEATHROW, etc.). When I got the CD I remember listening to the opening track, ‘Leave This World Behind’. It sounded like a tired KREATOR: slow, soft, simple, sometimes industrial and gothic, and far away from their golden years. ‘Phobia’ is some kind of easy listening single, with some really catchy tempo and riffs, perfect for a mainstream Metal show on TV. ‘Forever’, the third track here, is a mid-tempo one adorned with some industrial sounds here and there. ‘Black Sunrise’ was like a clue to everything that was to come two years later on “Endorama”. Every song has a similar structure and elements that make the music really plain and uninteresting. I don’t want to explain what happened here (I’m far from knowing what really was in Petrozza’s mind at the time). This is the time where Tommy Vetterli (CORONER) had joined KREATOR on guitars. His influence can’t be denied, not because of his great guitar skills (that I really love!), but because of the sound: try the last full-length from CORONER, “Grin”, or his work in CLOCKWORK and you will know what I’m talking about (I remember reading an interview in Blabbermouth where Vetterli said that Mille Petrozza was deeply into Pop music). Maybe Petrozza recruited him because of the aforementioned productions. Who knows? To be fair, this is far from being a terrible album (here goes a notable example of terrible stuff: BULLDOZER’S "Dance Got Sick!"). They came back to the Thrash territory in 2001 thanks to the “Coma Of Souls” inspired “Violent Revolution” full-length, but that’s a different story. This reissue comes with a bonus CD including live tracks from the 1998 Dynamo Open Air festival. Here you can find a mix of old classics like ‘Terror Zone’, ‘Pleasure To Kill’, ‘Extreme Aggression’ and compositions from “Outcast”, as ‘Leave This World Behind’, ‘Phobia’ or ‘Black Sunrise’. The performance is properly and the production is almost perfect. But again, KREATOR sounds really tired (just hear the ‘Lost’ version here or a mistake from Ventor at the beginning of the classic ‘Pleasure To Kill’). Anyway, now you have a new chance to complete your KREATOR collection. Visit the KREATOR website at www.kreator-terrorzone.de, follow them on Facebook here: www.facebook.com/kreatorofficial, and get your copy here: www.noiserecords.net