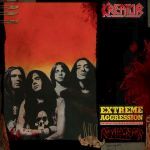 It might be hard to be objective when reviewing an album whose release I remember eagerly awaiting, and then buying at the store on the day of arrival and carrying home in my hands in expectation to lay down on the turntable. Then again, perhaps it’s the other way around, and maybe nothing is easier than evaluating an album whose lyrics I know all by heart. This is, in my opinion, KREATOR’s last truly great album. Sure, “Coma Of Souls” was great, but you could already sense the winds of change, you could feel something was amiss… Noise Records is releasing re-mastered versions of KREATOR’s old classics, and you may ask whether this new version sounds much better than the original, and whether it much improved my listening experience. The answer, obviously, is no. But it may be a good excuse to blow the dust off these old gems of Thrash Metal in the sad case you let them gather dust in the first place. The real tidbits of interest here are the thick booklets of the digibooks filled with loads of old photos, magazine cut-outs, lyrics, liner-notes to each song, background info by Malcolm Dome, and general memorabilia imagery related to the band. And also the bonus material, which in this case is a CD with the audio of the "Live In East-Berlin" gig that was released in VHS tape back in 1990 and that I also loved back when I bought it. It’s a killer gig, with a killer line-up of songs, so if you wish to have an idea of what KREATOR sounded like live back in their finest moment you could do no better, with great renditions of songs from "Extreme Aggression" but also crushing material from the band’s history like ‘Awakening Of The Gods’, ‘Tormentor’, ‘Behind The Mirror’, ‘Pleasure To Kill’ and others of the like. As for the album itself, I cannot say I am a fan of this new defaced version of the cover at all. The same as the original, with the addition of three scalpel blades, blood stains and stuff like that. And a crude logo-like "remastered" scratched in red under the title. That, however, is a detail. And if you do need a review of the album, the songs are still as lethal as always, and even if KREATOR are more polished and refined than in the past, they aren’t any tamer. I immensely appreciate Mille’s frenzied vocals, that are some of the best ever in Thrash Metal as far as I’m concerned. He has an absolutely magnificent performance here and his enraged snarls are the perfect match for the ferocious Thrash that he and his mates perform, making this a most aptly named album. There is a clear attempt to become more serious as a band, both in lyric writing (a bit more socially aware and focusing less on fantastic themes) and the music itself, with hints of more melody and compositional effort that do not compromise their trademark straightforward and furious Thrash, even if you feel the early teenage outburst is now more controlled and directed. So the final verdict is simple, since we are in the presence of the product of one of Thrash’s most iconic bands at the height of their career. A masterpiece. More info at: www.kreator-terrorzone.de, www.facebook.com/kreatorofficial, www.noiserecords.net