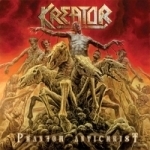 Introducing KREATOR to this site seems to me like importing Beck’s beer to Bremen. So let’s just concentrate on the hard facts… "Phantom Antichrist" is the fourth strike since these veterans entered the new millennium with a return to their roots. It was the end of their experimental phase in the 90s, which I liked – through the years, "Endorama" turned out to be better than I ever thought… It was a blasting return to the glorious times of "Pleasure To Kill" and "Terrible Certainty" with improved musicianship. But now KREATOR start to broaden their musical horizon again. Yet Mille and co just don’t need to look at the trends anymore (they never needed to), they took a deeper look at their own roots: Heavy fuckin’ Metal like we all (at least in my age) used to love in the early 80s… And so "Phantom Antichrist" became the most melodic KREATOR album to date. Just listen to the great singalong-choruses in ‘From Flood To Fire’ or ‘United In Hate’… And at the beginning of ‘Civilization Collapse’, I just wanted to ‘Run To The Hills’. But do not fear… It still is KREATOR, which means, there is energy, there is power, there is Thrash, there is heavy riffing… But it comes along a little more difficult nowadays. And, to sum it up, it works out brilliantly! "Phantom Antichrist" entered my personal KREATOR top 3 albums, along with "Pleasure To Kill" and the always underrated "Renewal". For more information, check out www.kreator-terrorzone.de/phantom-antichrist, where you can have an ear and a look at the video of the title track (just in case you haven’t yet) or go to the label-site www.nuclearblast.de