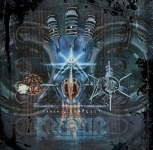 I like “Renewal”. I mean I have always liked that album of the band that sounds like KREATOR doing more of industrialized / Hardcore Metal. Wait, it was KREATOR? Oh, my… then I guess I have to judge them against their first albums and then for us old Metalheads, this is pure… wait! Ok, 90s KREATOR is a beast of different faces. To be honest, the band had already done what their extreme form of German Thrash limited them to do. “Renewal” brought a new face to the band and "Cause For Conflict", the next in order, is a logical continuation, if maybe having some traces of their older style, in a much more refined phase. And, let me tell you, this (the only album without Ventor on drums) is probably the one where they have the best drumming performance by Joe Cangelosi, once of the mighty US thrashers WHIPLASH. In fact this album sounds like if they moved from Germany to NY as it does sound a lot more like American Thrash and to a certain point like the most “accessible” sound of bands like SLAYER. The vocals since the last album are still a thing Mille has been doing as some sort of rest to what he usually does with his chords, or he just wanted to experiment a bit. They have a quite more tough-man approach thus many think it is a Hardcore approach, although I do not see that much in the music besides maybe some lyrics. As it is, this is a very good modern-sounding Thrash Metal album, with a very good production, yet it is not as catchy in terms of riffs as “Renewal” but is probably heavier. The 90s were a hard time for Thrash. It was the rise of Death Metal and at the end of that era the rise of Black Metal, so some bands took it easy and decided to keep their formula almost intact. Not KREATOR. They also did the weird “Endorama" so at least they were trying to do something different, yet never losing their essence. I you listen to this one with that in mind, many things will make sense. Compared to their return to total Thrash on “Violent Revolution” this maybe falls short, yet it is by no means a bad album. The fact is that nowadays KREATOR as many of their land mates and contemporaries, have their strength based on their early albums, and have kept releasing albums that are done in a safer formula with a few good riffs here and there but nothing more. And that is life it seems for veterans of any Metal. Yet they once dared to do things in a different way and even if back then that was received with mixed response, nowadays I find it to be a brave move. Of course I will always worship their first three albums, they have some entertaining albums in their discography and this is for sure one of those with a remastered package and bonus songs. Hopefully someday some of those bands re-invent themselves… well, I have my money bet on SODOM for now… and you? www.kreator-terrorzone.de, www.facebook.com/kreatorofficial, www.noiserecords.net