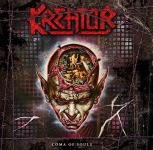 1990 was a very important year in the annals of Thrash Metal and Heavy Metal in general. It was a sort of watershed, that on one side started the decline of a saturated scene after a decade in which tons of new bands and extreme genres saw the light, on the other encouraged many key names in the music industry to experiment and to contaminate their styles. How did Thrash Metal react to this wind of change? Basically in two manners: firstly releasing a bunch of killer albums between 1989 and 1991, secondly falling into the trap of contamination during the rest of the 90s. "Coma Of Souls" by KREATOR is without any doubt one of the best extreme Thrash Metal albums released in 1990, along with "Better Off Dead" by SODOM, "Seasons In The Abyss" by SLAYER, "Tortured Existence" by DEMOLITION HAMMER, "Spectrum Of Death" by MORBID SAINT and "Swallowed In Black" by SADUS, just to name a few. After this titanic effort, KREATOR started a not particularly brilliant period of experimentation, but this is another story. To me the best part of their discography ends with "Coma Of Souls", an album that raises the flag of Teutonic Thrash Metal high because of an all star four-piece line-up with: Mille Petrozza (guitars and vocals), Rob Fioretti (bass), Ventor (drums) and Frank Blackfire Gosdzik (guitars). The latter also responsible for three of the best albums ever released by SODOM: "Persecution Mania", "Mortal Way Of Live" and "Agent Orange". Blackfire is one of the key success factors of "Coma Of Souls", a guitarist able to offer to the listener fast and creative riffings, mixed with lots of technicality, brilliant bridges, high speed melodic solos and virtuoso parts. "Coma Of Souls" is a superb album filled with catchy, fast and memorable riffs, both Mille and Frank did an excellent job here. Another great asset are Petrozza’s vocals: an high-pitched, harsh / sharp, angry and aggressive voice that fits perfectly with the social and protest oriented lyrics. When it comes to the rhythm section, the basslines are heavy and prominent, whereas Ventor’s drumming is brutal and dynamic as always. If I must compare this album to its predecessors, yes, it’s violent and fierce, but maybe it lacks the savagery of "Endless Pain" and "Pleasure To Kill". At those times they used to record without metronome ("Terrible Certainty" was their first recording session with a click track) and the production was pretty raw, so these albums had a more underground feel (not a bad thing). For these reasons, "Coma Of Souls" is the worthy heir of "Extreme Aggression", both albums were indeed recorded professionally in California and we can easily hear the difference in terms of polished sound with their early works. Talking about this particular reissue, it’s the last remastered version released by Noise Records in 2018 and comes in a beautiful digipak double CD edition. The bonus CD contains the legendary "Live In Fürth": a fantastic set including their most known songs and a very enjoyable solo by Ventor, that confirms himself as the European answer to Dave Lombardo. No more words needed: "Coma Of Souls" is a masterpiece and you ought to have a copy of it. For more info: www.kreator-terrorzone.de, www.facebook.com/kreatorofficial, www.noiserecords.net