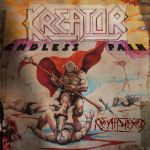 Once upon a dark moon, Noise Records was the best label in the world for me. Their roster was amazing: RUNNING WILD, HELLHAMMER, CELTIC FROST, VOIVOD, HELLOWEEN, RAGE, TANKARD… pretty much a teenage headbanger’s wet dream, run by Karl-Ulrich Walterbach, who was also the brain behind the notorious Aggressive Rockproduktionen label, (in)famous for releasing everything from SLIME, DAILY TERROR and TOXOPLASMA to German BLACK FLAG, MISFITS and ANGRY SAMOANS pressings and those "Underground Hits" compilations. The label (and with it the rights to all the releases) were sold to… Universal – one of the few remaining major labels in this day and age. So to think that all the new re-releases are independent records simply because of the Noise logo is just plain wrong. They were released by a fucking major label and what a major label cares about is money and not music. But that’s not necessarily a bad thing, because sometimes good things happen… case in point: the re-releases of all four KREATOR albums from the 80s. KREATOR were not the first Thrash Metal band in Germany – SODOM already had "In The Sign Of Evil" out, and DESTRUCTION even had an album by the time "Endless Pain" dropped – but KREATOR started with an album and were amazing, plain and simple. They were faster than anyone, and their only goal in the beginning was to sound as evil, possessed, brutal and fucked up as they could… "Endless Pain" is what they came up with. Recorded in only 10 days (with 2 weeks of studio time booked), it sounds like a full-blown street brawl and is still a testament that dedication, fanaticism and conviction wipe the floor with musical proficiency to this very day. This album was and still is what extreme brutal Thrash is supposed to be: over the top brutal, catchy, memorable and with artwork that would make your parents doubt your sanity. Yet, while this is an undisputed Thrash masterpiece, this version here reeks of lower instincts. First off all, FUCK the new artwork with the "remastered" addition. If it ain’t broke, don’t fix it. The sound is OK – it does sound great, no doubt, but once again, why change something that has already been perfect? And, if you change things, then make sure it’s done right, for Satan’s sake! Some intro parts are cut off, still cut off I should say, as it was the case with the re-release of the re-release a few years back already (which were already remastered as well, by the way, so you don’t hear a difference if you own those already – Frank). There is one definite source, and that’s the original album… it really can’t be that hard. If you care, that is. What makes this release really interesting nonetheless – apart from the stellar digibook packaging, with tons of flyers, photos, tickets and liner-notes in the booklet, of course – are the bonus tracks. Before KREATOR became KREATOR, they were called TORMENTOR and released two demos, one and a half of which are included here: "End Of The World" from 1984, and half of "Blitzkrieg" from 1983. It is beyond me why it’s not the full thing, but oh well… the two songs that were left out (‘Armies Of Hell’ and ‘Cry War’) re-appear on the second demo, but still… this leaves a bad taste in my mouth. The music however… it’s crap in the best of ways. It’s sloppy, amateurish, basic, and the vocals sound like someone stepped on a cat’s tail – but this is exactly why it rules and the shit production just adds to the charm. Let’s not forget that KREATOR were between 16 and 18 years old when they unleashed their noise onto the world… when I was that age, all I did was… you know, boy’s things. But anyway, what counts is the sheer brutality that makes this masterpiece what it is more than 3 decades later: it’s timeless Neanderthal aggression and brutality, hardly ever matched. The original pressings aren’t hard to get for a fair price, so it’s up to the buyer. You vote with your wallet. The official band website can be found at www.kreator-terrorzone.de, www.facebook.com/kreatorofficial is their Facebook dungeon and www.noiserecords.net is the record label.