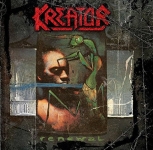 The re-releases of the older KREATOR albums through the revived Noise Records label continue in 2018 as well. After the four classic 1980s albums last year, it’s now time to reach the 1990s. And that decade still is not well accepted as far as the old bands and their evolution is concerned. Nearly any successful Metal band of the 1980s started to do some experiments in order to reinvent themselves. Improved studio technique helped to accelerate these tendencies. Sadly most of these experiments can be seen as failed. Yet some of these experimental albums still do well, as far as I am concerned. And one of these albums is “Renewal”, the programmatically titled first KREATOR album from 1992 that really broke with the traditional sound of the band. Influences from Hardcore Punk and Industrial as well as some Alternative Rock moments found their way into the Thrash Metal sound of KREATOR in massive amounts. Just listen to the opening ‘Winter Martyrium’ that comes along with an Industrial intro piece. Fast verses pave the path for a decelerated bridge. The following title track ‘Renewal’ is a really slowed down song with grooving rhythm and moments that reminded me of JANES ADDICTION. ‘Reflection’ is also full of surprises like unusual melody lines and oddset drum patterns. Recurring industrial samples in ‘Brainseed’ are as new to KREATOR as the Hardcore styled riffs. The opener of the album’s B-side, ‘Karmic Wheel’ is even more surprising than the first four tracks, for it has a psychedelic character that unfolds completely in the middle part and is over all more an Alternative song than Metal. The short sampled interlude ‘Realitätskontrolle’ leads to a pretty modern Thrash song. ‘Zero To None’ is grooving and has a Hardcore touch as well. It’s only ‘Europe After The Rain’, the penultimate song that finally brings back most of the style KREATOR was known for. Yet, there is an alternative break in the middle of the song as well. After the psychedelic (again) intro, the final ‘Depression Unrest’ turns into a melodic and in the chorus extremely catchy Industrial tune with hints on Hardcore as well. So to say, this one is a kind of essence of the whole “Renewal” album. Back in the days, this album confused anybody into KREATOR a lot and over the years, it became a real stepchild in the discography of the band. Even more, it turned into a kind of synonym how bad the old bands became in the 1990s. Yet, I still refuse since I really liked the album when it came out in the end of 1992, a time when I was really open-minded to fresh and experimental harder to extreme music anyway. And over the years, “Renewal” turned into a kind of secret favourite KREATOR album to me. I just liked the way KREATOR sounded here, the very dry production and the experimental character of the album. In addition, ‘Winter Martyrium’ and ‘Depression Unrest’ are real earworms. As far as KREATOR are concerned, the band still adheres to “Renewal” and all their other experimental albums of that era as steps that led to the recent sound of the band. The title track even appears on the set list of their live shows from time to time. So, if you didn’t like the album back then, this re-release of the remastered album might be a perfect moment to give the album another chance. As for all the KREATOR re-releases, there is some bonus stuff as well, in this case three songs. We have a demo version of ‘Winter Martyrium’ with a rougher sound and a vocal delivery of Mille that is more in the style of the predecessing albums. With ‘Trauma’, we have a very early version of ‘Winter Martyrium’ that is completely different from the demo and the album version. Some elements are similar, but in general, ‘Trauma’ is a melodic, NWOBHM based song with an acoustic break. The final track ‘Europe After The Rain’ is claimed to be a remix, yet it must be a demo version from the same sessions as well. This version is rawer and more based on classic KREATOR as well. These final two alternative versions are really interesting in historical aspects and maybe a reason for me to get the new double vinyl of “Renewal” in addition to my original album. In case you need information on KREATOR, visit: www.kreator-terrorzone.de or www.facebook.com/kreatorofficial. For the label, it’s: www.noiserecords.net