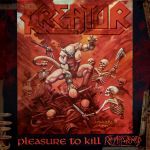 Noise Records is tearing it up lately with reissues. They are spewing out reissues from VOIVOD, CELTIC FROST, HELLOWEEN, KAMELOT, RUNNING WILD, TANKARD, GRAVE DIGGER, SINNER, SKYCLAD and KREATOR. Talk about giving the Metal community and the younger generation the chance to have some precious Metal gold! Whether the bands gave their blessing to have Noise do these reissues is another topic (CELTIC FROST has already noted that they do not give their consent for these reissues). Now we focus on today’s review of "Pleasure To Kill", KREATOR’s 1986 opus that helped bring the spotlight to Germany’s take-no-prisoners Thrash Metal society. So I know what you are asking yourselves, "But Jaime hasn’t this album been reissued a gazillion times already? What makes this one so special?" Well here is the low down: the album is remastered, the album includes the long sought after "Flag Of Hate" EP as bonus tracks (yes similar to the 2000 reissue by Noise), a 26 page booklet that includes liner notes from frontman Mille Petrozza, and all that in a digibook CD format. I don’t want to spend too much talking about the music from the album as this album being a classic and reissued multiple times I’m sure you know what you are getting. I will instead focus on the remastering as that is the main reason for this review. The sound is killer, crisp, and it rejuvenates the album from its initial production sound. The liner notes are a nice touch and give a nice perspective of how things were when the album was being created and released to the public. Personally I am still getting used to this digibook setup that has been a new staple for releases in the past couple of years. Overall a nice jewel to add to the collection. Big shot out to Noise Records for pulling the milestone albums from the above mentioned artists, making the investment, and continuing with this reissue renaissance. Some may call it a cash grab by Noise Records, but I personally think the label is really trying to get that newer generation to check out some classic albums that brought Metal to the forefront and lead to future genres. KREATOR has vested a good amount into these reissues and providing the buyer a bit of behind the scenes perspective through the liner notes. For those of you die hard collectors then this is a must, for those of you that can take it or leave it I suggest you at least give the reissues a listen to see if they peak your interest. The only thing missing is the vinyl version, but I’m sure Noise is looking into that by now. For more information check out: www.kreator-terrorzone.de, www.facebook.com/kreatorofficial, www.noiserecords.net