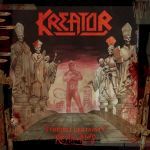 Most of you will by now have become aware of the fact that the legendary Metal label Noise Records was re-animated. The label responsible for a lot of releases that are labeled “cult” nowadays (with great justice) was in fact one of the most important record companies of the 1980s Metal scene. The Berlin based label released the groundbreaking records of bands like VOIVOD, CELTIC FROST and KREATOR, to name just a few. To celebrate the resurrection of Noise Records, those in charge gave the finest, mostly genre defining and still celebrated albums of their most important bands a proper re-release. So they took care of the first four albums of German Thrash titans KREATOR. All of them were remastered and got bonus material from the time of the original releases. As far as the packaging is concerned, the new editions are quite luxurious as well, since the artworks were restored carefully as well and both 180g vinyl and CD version feature sleeve notes by Mille himself and tons of photos of the times of the albums. So, the settings are very well for a series of re-releases overdue, since the albums were out of print for more than a decade now (not really… in 2000 there have been remastered re-releases with partly quite similar bonus material already – Frank). Musically, the importance of the first four KREATOR albums can not be underrated anyway. Or do I really need to introduce you to “Terrible Certainty”, the third KREATOR record from 1987? Maybe I should do so, since that album was always overshadowed by its mighty predecessor “Pleasure To Kill”. And it’s a little bit underrated as well, even though it was the album that changed the direction of KREATOR to a more professional one, as far as musical quality and structures are concerned. Thus the raging fury and the merciless power of the first two albums were replaced by songs that were more catchy. “Terrible Certainty” was the album that helped KREATOR getting as huge as they were and manifested the state of the band in the worldwide Thrash scene. And even though I was a little bit disappointed when the album came out originally, I now appreciate this album for what it is: a classic Thrash Metal album with no flaws but a bunch of hits like ‘Blind Faith’, ‘Storming With Menace’, ‘No Escape’ or ‘Behind The Mirror’. Listening to the album 30 years later, it still is jolly good fun and a good example for fine German Thrash Metal. The remastering did no harm to the album but just refined the sound without taking the original listening experience. The bonus album of the CD starts off with the complete “Out Of The Dark… Into The Light” 12” EP from 1988. Alongside the new song ‘Impossible To Cure’, a quite forgotten jewel, it also featured a cover tune that showed the NWOBHM roots of KREATOR. The old classic RAVEN tune ‘Lambs To The Slaughter’ received a fair treatment from Mille, Rob, Ventor and Tritze. That EP also featured three tracks that were recorded live at a show at the Dynamo Club in Eindhoven in May 1988. Those pretty unpolished classics were ‘Terrible Certainty’ and the old master pieces ‘Riot Of Violence’ and ‘Awakening Of The Gods’. But this is not the whole bonus stuff. You additionally get three more live tracks, ‘Flag Of Hate’, ‘Love Us Or Hate Us’ and ‘Behind The Mirror’, all recorded at the Werner Seelenbinder-Halle in East-Berlin (GDR) in 1990. This is very confusing, since that complete show is the bonus material of the remastered “Extreme Aggression” album as well (yeah, but those 6 live tracks already appeared on an old US CD edition of the "Out Of The Dark" EP, so it makes sense that they all get used for this re-releases now – Frank). Yet, it doesn’t affect the joy of listening of course. With this being the whole bonus material, I am a disappointed that one logical bonus song was left off: the cool TYGERS OF PAN TANG cover ‘Gangland’ that was on the B-side of the 12” “Behind The Mirror”. Somehow I don’t really understand why this one is missing. But that’s enough criticism now, since we’re here to celebrate the fact that “Terrible Certainty” is available again. So it’s your chance to finally get this album if haven’t yet. Helpful links are www.kreator-terrorzone.de, www.facebook.com/kreatorofficial and www.noiserecords.net