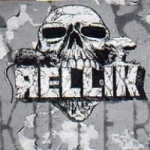 Thanks to Iron Glory Records, we can discover today some forgotten heavy bands from the 80s, like TYRUS, KRAZE or now RELLIK. How commendable this politic of exhumation is, the reissues are unfortunately poorly packaged, in the sense you don’t get the necessary info about the band in the booklet, some liner notes would be more than welcome. In the RELLIK case, I rummaged through my tiny collection of fanzines to finally exhume some bits of information from an old Snakepit Magazine issue. RELLIK were in activity around 1986, the golden era of American pure Heavy Metal, at a time when bands like FATES WARNING, JAG PANZER, CRIMSON GLORY and others enchanted our ears with aggressive while elegant music. RELLIK fit straight into this tradition, delivering a fine brand of Heavy Metal inherited from the UK, but with an extra touch that made them easily recognizable as Americans. Vocalist Mike Moore (believe it or not, I have not found the line-up printed somewhere one the CD!) is surely the biggest surprise of this disc, in fact his voice reminds me of the one of the guy in SIREN and MEKONG DELTA, and even bring back to mind Tim Baker of CIRITH UNGOL on the track ‘Into The Flesh’ (by far the best song on offer here, with a somewhat sinister touch). The second half of the CD appears superior to the first one, in the sense the RELLIK musicians show here more talent in the songwriting and arrangement departments. In fact, the four first tracks come from an EP issued in 1986, and immediately after that the band re-entered the studio in order to lay down four other ones, hence the differences between the two batches of songs. This CD is surely a fine addition to a comprehensive Heavy Metal collection and comes out better than 80 per cent of the “true” Heavy Metal of today. Take note that the sound of this release is fairly decent for what I imagine as rushed recording sessions (due certainly to a lack of a proper label support back then). So don’t expect a cheap demo sound. A nice one!