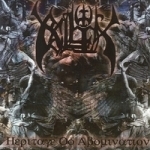 Now both the band and the label that released this album are no more. United Guttural are out of business when the owner, Rich Lipscomb (ex-Fleshgrind) sold his label and the band, Rellik ceased to exist after the departure of their founder drummer. “Heritage Of Abomination” is actually an old release as this album was released in 2005, but I think Deathgasm (which bought United Guttural Records) still have the final stock of this album. Rellik plays old school and technical Death Metal, but it’s not actually really Death Metal as their music has also the vibe of Power Metal and more or less some Thrash Metal feels. The whole album is surrounded by totally great melodies, and I do spot some similarities to Dark TranquiLlity or maybe some melodic guitar riffs that remind me of Kataklysm. Apart from that, Rellik also serve their music with high speed and the deep growl vocalization is in the vein of old school Death Metal. That’s why it’s hard for me to define what type of music these guys are actually playing! Maybe I could say power Death Metal or blasting Power Metal? What kind of shit is this?! Well, I think the music’s definition isn’t that important here but to tell you the truth, Rellik manages to create a kind of genius Death Metal that we usually don’t get to hear. Note that while listening to them, I’m always enjoying their high class melodic riffs! www.deathgasm.com