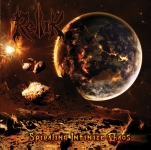 RELLIK is a rather new force on the American Death / Thrash Metal scene, the bottom of the music is laid upon a Death Metal pattern infused with some thrashy riffing and guitar leads, and a growled screamed hybrid bastard of a vocal, suiting this dark and aggressive burst of intensity quite well. When I say quite new force, it is with a twist, as the band originally formed in 1987, though didn’t release anything until 2004, and then again in 2007 and now finally a full length album. The band was formed way back by Matt Dwyer, who might be best known for his bass lines on MASADA’s "Hideous Rot", and very soon for RELLIK. On drums we have quite a legend in Craig Smilowski, who also drummed in MASADA, but also is a bit known for his work with GOREAPHOBIA, and for his drumming on the first two IMMOLATION albums. This is nice old school and made of well known recipes for music that works, we have brutality, finesse, speed, slowness, catchiness, intensity and an overall feel of lots of energy and great riffing, together with some gnarly and great rhythm patterns, some also a bit neck breaking. A well written record that has caught me off guard, even though it took a couple of spins to settle in. If you like it brutal and delivered like in the good old days, "Spiraling Infinite Chaos" is the album to get hold of. A nice showcase of Death / Thrash done just right! More info: www.facebook.com/rellik.newjersey, www.horrorpaingoredeath.com