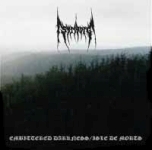 In April 2005, Stephen O’Malley featured on his personal website (www.ideologic.org) an interview with STRIBORG mastermind Sin-Nanna. He also recommended some CDs out of the abundant yet highly confidential STRIBORG discography. The whole feature aroused my interest, so I managed to get hard to find records to make out my own idea about this obscure Tasmanian act. Little did I knew then than STRIBORG name was destined to be widely spread out with enthusiasm within some “well informed” avant-garde circles, to the point the latest SUNN O))) album (“Black One”) featured an homage to STRIBORG (with the track ‘Sin Nanna’). No wonder then that “Embittered Darkness / Isle de Morts” was picked up by Southern Lord Records (run by O’Malley partner in crime in SUNN O))) Greg Anderson) for a licensing deal in North America. For those not familiar yet with Sin-Nanna’s vision, let’s say that STRIBORG is about an avant-garde form of crude, cruel and primitive Black Metal, where the rawness of the production plays the role of an auxiliary musical instrument. Sin-Nanna claims his debt to the morbid and angered visions of ILDJARN, so this is another clue to give you an idea about STRIBORG creations. Concept wise, all the Sin-Nanna inspiration comes from the landscapes of his native land, Tasmania. This is another common points with his Scandinavian counterparts for who the inviolate nature, full of mysteries and darkness, appears like a constant source of creative ideas. Tasmania is reputedly a very strange environment, where the rainforests could induce irrational surge of fears; this is perfectly transcribed within all the tracks written by Sin-Nanna, the Black Metal he performs is all about fear and you can’t get out of a listening session of any STRIBORG release without a disturbing and a foul aftertaste, like as if you are contaminated by the poisonous presence of a black ghost. The music encapsulated in “Embittered Darkness / Isle De Morts” is very representative of the whole STRIBORG discography. It goes without saying that Sin-Nanna performs all the instruments; the compositions are recorded with primitive devices, likely analogic four tracks machines like it was the case before. The guitars produce a sort of static noise put way down in the mix; the variations within any given track come from the percussions (I can’t figure out if Sin-Nanna uses programmed or real drums or even a mix of both), even the acoustic guitar is used like a percussive instrument, a primitive tribal drum. The voice is probably the most prominent element in the STRIBORG sound signature: a menacing, rampant and sinuous croak, deeply inhuman in its nature. Some primitive synths are to hear here and there, to build up some ambient interludes; needless to say, don’t expect symphonic arrangements but instead disturbing repetitive sounds. Note that the “Isle De Morts” part of the CD is in fact the reissue of the third demo of KATHAARIA, Sin-Nanna’s previous project before STRIBORG. On this, the music is less personal in the sense the Norwegian influences are more obvious; yet, the music is fantastic, extremely violent. Sin-Nanna’s vocals evokes Satyr’s ones here. The pace is frantic, and the riffing no less crude than on “Embittered Darkness”; the intro of this part reminds the legendary one of the first BATHORY record (do you remember ‘Hades’?). To summarize: STRIBORG belongs to this new wave of grim Black Metal bands that surfaced these last five years in reaction to the commercial and bankable heresies that CRADLE OF FILTH and DIMMU BORGIR embody. This very underground Black wave rekindles with the cold violence of the origins and find a source of inspiration in the latest manifestation of avant-garde Metal and non-Metal music. I think the entire STRIBORG discography is an essential piece in any serious Metal collection. To read more about Sin-Nanna and STRIBORG, investigate the 04/19/2006 entry of the website aforementioned, and go also to the following: www.southernlord.com, www.displeasedrecords.com and finally to www.geocities.com/striborgfanpage a site I suspect run by Sin-Nanna himself.