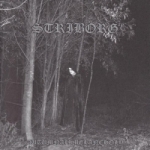 And again STRIBORG, a term which really fits due to alone seven re-releases of old material in 2007 (plus 1 DVD) but this time Displeased Records is in the position to offer new material in form of STRIBORG’s latest release “Autumnal Melancholy”. If I confirm that nothing changed more or less the core message has been transferred because for all die-hards out there which can’t live without a further hour a dark, depressive, ghostly Black Metal this is the most important fact. Sin Nanna is on the road since 1993 and due to the fact that “Autumnal Melancholy” isn’t the first STRIBORG album I review within the last six months think that even if we talk about progress on a millimetre scale this is one of the better releases by this obscure one man band from down under. The release is splitted into 4 long typical STRIBORG songs and 4 dark ambient “Elements” and the different parts working more closely together which improved the vastness and dark soul of his release (compared with old releases like “Trepidation”). STRIBORG’s music as advised before is still true underground and will definitely not be found in the next EMP Mailorder catalogue on the first page but for all fans of depressive Black Metal worth a try. www.displeasedrecords.com