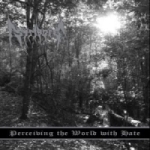 Of the multitude of Black Metal bands who fall under the hotly debated "depressive" sub-category, STRIBORG are among the best. At least it should be. Sin Nanna, the man behind the entire thing is adept at what he does; make decent, slowly paced Black Metal with a wondrous touch of the eerie and gloomy. This release, yet another in a long line of albums dating back to 2004, differs hardly at all from its predecessors. And yet, there’s no reason for any STRIBORG fan to dislike what this album offers. Sin Nanna is highly talented when it comes to setting the mood. The tediousness of the songs is considerably lessened by the overwhelmingly negative void that saturates each and every song. With such effects, it doesn’t make sense for Sin Nanna to use his voice at all, since the entire album breathes and moans along with him. Sadly, this otherwordly excellence suffers a dip in quality on the third track, ‘Call Of The Redwood Forest’, which sounds ever so much like a BURZUM rip off. And really, is there anything about ‘depressive’ Black Metal that does not copy BURZUM or STRID? Interesting, Sin Nanna recruited Malefic of XASTHUR to record three keyboard tracks, each approximately 10 minutes long. They are: ‘Origin Of Paranormal Possibilites’, ‘Ethereal Moon’ and ‘Perceiving The World With Hate’; a curious mix of LUSTMORD and French Black Legions Metal. With all these set in place, STRIBORG have unmasked yet another disturbing musical scar. www.myspace.com/striborg, www.displeasedrecords.com