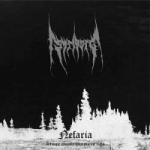 When it comes to the topic "sound", I must admit that I am not a sound fetishist. The music itself is more important and accordingly, from my point of view, sometimes a harsh and rough sound fits more than some polished high-end production. But what STRIBORG are offering on this release is, even for a Grind and Noise Core fan like me, almost near to the edge of being unlistenable. Especially the second part of this release, the first STRIBORG album "Tragic Journey Towards The End", which dates back to the year 1993. Ok, I know that 13 year old four-track recordings definitely do not sound like a high-end production, but even back in 1993 I would have labelled this sound as horrible. The first part, the current album "Nefaria", got a better sound, but the music is just boring. There is more about playing Black Metal than just putting some drums, guitars and shrieking vocals together and the keyboard episodes totally lack of inspiration. Since STRIBORG are active for more than 13 years by now, I guess the man behind this band, Sin Nanna, is performing this style to produce some kind of art, but even on this aspect he fails. ABRUPTUM for example did a much better job to play not just music, but to be pure evil. So to cut a long story short – awful sound, boring music, poor concept. www.myspace.com/striborg