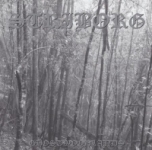 I had to listen to this one for a couple of times, before being able to do a proper review. I could easily finish it telling you this sucks and deserve to be buried and forgotten. But I will try to give a deeper insight on the music of this one band. I have to use the term “band” or “music” in a very loose way. Although they have been going on since 1994, I suppose the one and only member wakes up from hibernation once in a while, and in a couple of hours in a cheap Casio keyboard, with a cheap drum machine, and a cheap electric guitar (with a really whiny distorition sound, no powerful guitar sound, that would kill the atmosphere) in a cheap recorder with a cheap microphone, it is all done. If the vocals are also done with a severe cough, add some bonus points. This is supposed to be some sort of Black Metal with a lot of weird “evil” noises and sounds mixed in between. One can also tell there is supposed to be a “suicidal” atmosphere here. While some info about the band claims influences from XASTHUR, LEVIATHAN and VON, this release goes more towards the atmospheric parts and leaves on a second place the Metal sound. Again “Metal” used in a very loose way. To some, this might be a quite depressive form of black art. In reality this kind of “bands” are just nothing more than an image, to hide the lack of musical qualities. I mean, the one and only member does not give interviews! I guess it will be pretty tough to answer why you still make so awful recordings after all these years. Ok, well, the lousy and poor production does not help either. Metal is supposed to be about loud guitars, not an under produced blur-like sound and drums sounding like hitting empty cans. This makes me think the “band” tries to make the image, lyrics and overall atmosphere to come first and the, back in there, the music. The most bearable song is the one that gives name to this album, going on for more than 10 minutes, that sounds like a trance invocation, and some more traditional Black Metal riffs can be heard. Only here I can hear some VON references, mainly for the simple and repetitive main riff, but that’s it. I suppose there are people that might find something interesting in this, but the few other “bands” that are making a similar kind of music, at least take a bit more care of the overall presentation of the product, meaning better production and more interesting ideas. So, if you like to hear something depressive, with a rehearsal like production, with a lot of sounds and some really under produced Black Metal touches, there you go. Although not exactly in the same style, bands like ONDSKAPDT and SHINING (who also mix sounds and atmospheres with Black Metal) create wicked masterpieces. As for STRIBORG, it makes me to appreciate the “delete” function in my computer. www.displeasedrecords.com