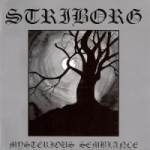 The old Black Metal cult has infected the whole world in the last 20 years, including far away places like Australia, Brazil and South Africa. So, holding an album in your hands from one of the busiest bands from Down Under, STRIBORG, should no longer surprise. Displeased Records are quite successful during the last 12 months by re-releasing some real classics to the younger Black Metal hordes world-wide (for example BORKNAGAR’s debut album, VINTERRIKET etc.) and within this month you get the chance to get your hands on the 2004 / 2005 STRIBORG’s albums "Trepidation" and "Mysterious Semblance" which had been available only on a strictly limited basis so far. STRIBORG’s music is raw atmospheric Black Metal which due to the main instrument, the keyboard, is not seldom given the impression to listen to a forgotten BURZUM release! Sin-Nanna, the only band member, is rejecting any kind of contact and interviews so his sole expression is his music and honestly speaking "Mysterious Semblance" is not a classic release but a step forward compared with STRIBORG’s 2005 album "Trepidation ". The 9 tracks are offering misanthropic Black Metal which easily extend the 15 minutes limit, so the overall length of nearly 80 should not surprise. The sound is extremely underground but Sin-Nanna is concentrating on the creation of a pure misanthropic atmosphere and this time the guitar and drum section is supporting this (a major point which unfortunately couldn’t be resurrected on their next release "Trepidation"!). To make a long story short, if you are interested in STRIBORG’s creations try "Mysterious Semblance", because the next winter is nearby! www.displeasedrecords.com 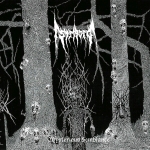 Atmosphere, this album has plenty of it. Synths pave the way, first as an intro and then as the beginning of the first song, so when the guitars hit, there’s a feeling of dichotomy between the synths and the treebly strings with the former feeling quite spacious and the latter flat. So when the keyboards back out it’s hard not to notice. And what’s also not hard to notice is that the guitars kind of serve as a backdrop for the synth lines and drums with both being more up front which is not automatically a bad thing, especially when they are comprised of, well, quality stuff. The synths not only sound creepy but the lines don’t sound typical, meaning they don’t consist of chords, played on keys, but actually drive the songs forward. And if you’re going for this kind of mystic / mysterious vibe they fit like a glove. Seriously, the ability of this music to transport the listener to some place, whatever that may be, cannot be denied. Much of that is owed to the synths. Now for the drums. No virtuoso playing here but only slight touches that break the motonomy, one of the traps of abundant repetition. But what that does is it pulls you in – the synths lure you, but it feels it’s the drums that grab you. And with raspy yet atypical vocals in conspiracy with the guitar buzz – riffs would probably be quite impossible to discern if the tempos would be much faster – you get a sum that feels very much like a thing that is hard to compare to something else. Sure, this kind of low fidelity Black Metal may be in trend right now, but STRIBORG’s been doing it for so long that it’d be unjustifiable to label the man behind it as a trend hopper. What else cannot be denied? The length. But it works, because the music takes its time – the riffs aren’t really numerous and the drums keep it varied, so your mind can really settle when going through the album. Plus this is not the kind of music that you go fishing for riffs or killer drum fills in but a more spiritual affair where you just let go. Summa summarum, expect repetition, synth lines that’ll stay with you for days, build ups via drums, vispy vocals and… bass? No idea if it’s there. Don’t it pass you by: www.facebook.com/striborg666, www.satanath.com