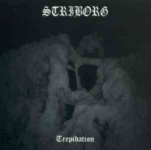 Dark hypnotic Black Metal from Australia sounds more than interesting compared with the next standard release from far far north. But this release is unfortunately not a step forward in Striborg’s carrier. Sin-Nanna, the creator of this 10 track album with the premium length of over 70 minutes, released this in 2005 only on a very limited format and Displeased Records is now offering the album as a re-release to all Black Metal lunatics with a really nice cover / booklet plus 3 bonus tracks. Striborg’s music could be described as a very harsh Black Metal based mainly on keyboards with very dark vocals which could only be loved / hated? During the 10 mid-tempo tracks there are several atmospheric fragments which, isolated from the songs, achieve a dark hypnotic atmosphere. But the drums / guitar work is this time very often extremely “easy ” (to say it on the friendly basis) furthermore repeated several times during one song that I can’t avoid the feeling that Sin-Nanna wasn’t fully concentrated on this release. To be honest I know that every single release shows the heartblood of the individual behind the music and this album could be a cult release due to its black / white cover and the pure sound (everybody older than 25 will agree that we all bought some albums blindly in the 90s only because the cover design was a definite proof for a Black Metal album), but in 2007 this album is nothing more than pure average due to the fact that pure sound, black / white cover and a mysterial image is not out of fashion. This album seems to be released too early after the last release (“Mysterious Semblance”) to let a fleshcrawl built up on your skin. A pity because Striborg are able to darken the sun, even in Australia but not with this release! www.displeasedrecords.com