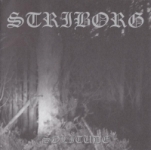 STRIBORG have since their creation more or less been a love/hate-thing. This will most likely not change with the new album. When I had been introduced to this band by a friend from Tasmania at the end of the 1990s, I would have never thought that this band would attract the attention it later did. It was solid, slow-paced Black Metal that to some probably would include too many ambient or repetitive parts, but which was the right soundtrack for certain moods. The problem with some of the old recordings was more or less the production and especially the drum computer. While the music itself has not changed that much (and although it is a bit unfair to STRIBORG because Sin-Nanna’s releases are partly older than Malefic’s) which is still in the veins of XASTHUR or the ambient music ILDJARN released, this could easily be one of the more accessible STRIBORG-recordings. The production has changed for good – one can actually listen to this recording without greater pains, and the songs itself have gained from this, as they breathe more soul somehow. After all I was pretty surprised when I listened to this, and would call this is the best STRIBORG-release to-date from the ones I do have. Probably a good start for those unfamiliar with STRIBORG until now. www.displeasedrecords.com